In the wake of the Chattanooga shootings, another apparent act of lone-wolf terrorism, the search for answers and for retaliation comes again.

After every such incident, that search is renewed: why did this happen? Is it religion? Poverty? How do we stop it?

But maybe we are asking the wrong questions – sharpening the same tools again and again will do us no good if they weren’t the right tools.

What we need instead is an examination of whether we’re looking at the problem the right way to begin with. That perspective comes from 14 years of studying extremism, terrorism and sectarian conflict in the field – and 14 years studying American responses to terrorism post-9/11.

A perception of no choice

Terrorism is usually thought of as a “thing” — the result of a psychological or moral malfunction, the presence of evil, the absence of soul.

Secretary of State Kerry used this phrasing at a summit on countering violent extremism in February, when he said,

In more tactical and policy-related circles, studies of terrorism tend to focus more on the intent than the cause:

In fact terrorism has no one cause, although it would be comforting to think it did, and even the reasoning can vary depending on the group and the perpetrator.

We could blame Islam, but the Oklahoma City bomber, Timothy McVeigh, was a Christian. We could blame religion, but the UNABOMBER, Ted Kaczynski, was an atheist. Poverty is a common refrain, but the 19 hijackers on 9/11 were of the middle class. Stupidity or insanity would perhaps be satisfying answers, and yet we have seen time and time again how terrifyingly articulate and ostensibly sane terrorists can be — the 19th century French Anarchist Emile Henry being an excellent example.

All of these people had other options in life, but all are united by a common theme: the perception that they had none.

Terrorism, I would argue, is better viewed as the result of choice — or more accurately, it is the end of a long series of increasingly narrow choices.

Dylann Roof put this literally, in writings posted before his attack on the Emanuel AME Church in South Carolina:

Timothy McVeigh hinted at it in one of his own statements, when he said,

And Chattanooga’s Mohammad Youssuf Abdulazeez said as much only last week, when he described life “as a prison.”

An ever narrowing funnel

If we were diagramming this, it would look like a funnel, with “normal life” at the wide end, and “attack” at the narrowest point.

Many things can go into the process that makes the funnel narrower and they usually come in pairs:

Each progressive choice shuts down some options, and makes others — especially one particular one — more likely.

Openness is the answer

The strong suggestion here is that if terrorism tends to correlate with a perceived lack of other options, then the best response to terrorism is to expand people’s ability to see a greater range of options available to them.

What that means is education, good governance and access to resources.

Following that, it means stopping whatever serves to make a society feel that its options have run out.

And that, in turn, means not repression, but more openness. Not a restriction or surrender of civil liberties, but the unequivocal statement that they are an inviolable part of who we are and what we want our society to be.

The presence of increasingly heavily armed and armored police is not a reminder of what society is enabled to do, but what it’s prohibited from doing, and a constant symbolic reminder of its fears.

While Americans tend to feel more secure with an armed presence nearby—a reaction mirrored across threats ranging from terrorism to crime, the irony is that the bigger and more prominent the weaponry, the more likely it is to cause more damage than it prevents.

Meanwhile the loss of perceived freedom of movement, the restrictions on thought and action, and the constant reminder of threat feeds into the narrowing funnel that those on the path to violence will tend to feel and act upon.

The best we can do is seek to manage, and reduce the percentages. In the public discourse, however, that doesn’t fly very well — no matter how rational it is.

The most common cry is that when it comes to terrorism, anything that doesn’t put another gun in the fight equates to “doing nothing.”

The hard change is shifting the public narrative away from fear in a way that builds more openness while, at the same time, paying respect to the loss and pain of those directly affected by acts of terrorism.

That urge to “do something” that carries the satisfaction of a retaliatory body count is a particularly hard one to swallow, even though we know full well that it is a basic terrorist goal to “do something that provokes a violent response.”

The point being that a violent response is then leveraged into a rallying cry, and greater recruiting “for the cause,” and the spiral continues to grow.

And yet we also know that as a nation, our greatest gains against racism have come when we recognized that it tends to die when dragged into the light of public discussion.

Similarly, religious radicalism is lessened by exposure to new ideas. This is the nature of reason, the nature of rationality, and it is the first, best way to reduce the chances of further attack.

There will of course always be a need for hard defenses against extremist violence, homegrown or otherwise — for intelligence and for soldiers, for police, and even for the arms and armor.

And yet the way we fight the battle has a lot to do with whether or not we win the war.

As a society, we need to be incredibly careful as we design and field our responses, when we hear ourselves say “they’ve pushed us…we have no choice.” 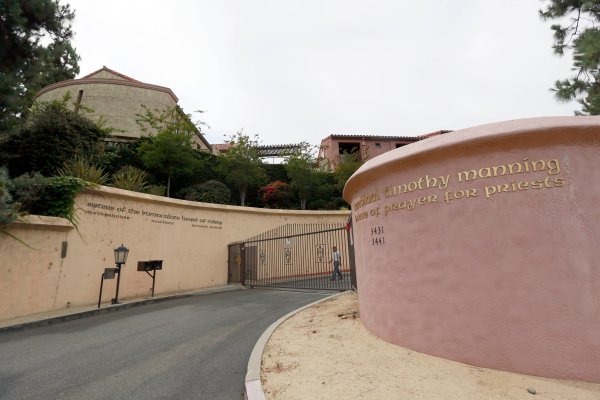 Katy Perry Isn't the Only One Who Wants to Live in a Convent
Next Up: Editor's Pick