Three astronauts who will spend the next five months in space launched from the desert in Kazakhstan on Wednesday.

The astronauts launched to the International Space Station from the Baikonur Cosmodrome aboard a Soyuz rocket at 5:02 p.m. EST. Over six hours, the crew orbited the Earth four times before catching up to the space station, docking at 10:46 p.m. EST.

The astronauts’ launch was delayed after two consecutive failures of cargo vehicles that were meant to deliver supplies to the International Space Station.

The first setback occurred in April when the Russian Federal Space Agency was not able to regain control of a vehicle after launch. As a result, the Progress vehicle and the cargo it was carrying burned up in Earth’s atmosphere.

The second failure occurred on June 28 when the SpaceX Falcon exploded just two minutes after the launch.

The unsuccessful supply missions created a ripple effect through the public and private agencies that work with the International Space Station, delaying American astronaut Scott Kelly and Kjell Lindgren’s planned first spacewalk, which was supposed to occur between Aug. 10 and Labor Day. The failures also delayed work on the reconfiguration of the space station for the arrival of commercial cargo and crew vehicles.

The three astronauts arriving at the International Space Station on Wednesday include Lindgren and Kimiya Yui, who are flying for the first time. They are led by Soyuz commander Oleg Kononenko. The crew is slated to stay in space for five months, returning on Dec. 22.

The trio will join Kelly and Russian cosmonauts Mikhail Kornienko and Gennady Padalka, who have already been in space for 117 days. They launched in the early hours of March 28. 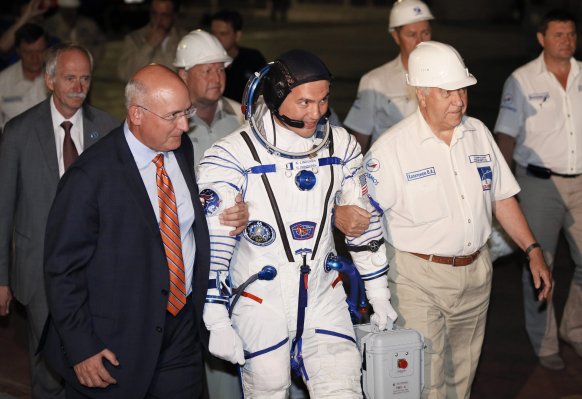 Exclusive: Astronaut Talks About Going to Space for the First Time
Next Up: Editor's Pick