Remembering How the French Got Ahead of Lance Armstrong

Lance Armstrong takes the start of the 20th and last stage of the of the 90th Tour de France cycling race between Ville d'Avray and Paris Champs Elysees, July 27, 2003.
Joel Saget—AFP/Getty Images
By Jennifer Latson

When Lance Armstrong won his fifth consecutive Tour de France title, no one was more disappointed than the French, who resented him for a number of reasons — not the least of which was his tendency to win their most famous road race, year after year. On this day, July 27, in 2003, Armstrong tied Miguel Indurain’s record for winning the most consecutive Tour titles. He then went on to win two more years in a row.

Armstrong was stripped of all seven titles in 2012, following revelations that he had used performance-enhancing drugs. But the French media were, from the beginning, much more aggressive than their American counterparts in pursuing the doping rumors that chased Armstrong throughout his cycling career.

Already in 2002, as he pedaled through the hills of Provence en route to his fourth Tour victory, he was heckled by French crowds jeering “Dopé!”

TIME defended the American champion. “Armstrong, who is randomly tested for drugs throughout the year and has always been clean, has nevertheless faced suspicion that given his domination of a drug-tainted sport, he must be illegally boosting his performance,” TIME notes in its report on that race, adding that Armstrong’s feelings were hurt by the French accusation.

“A boo is a lot louder than a cheer,” TIME quotes him as saying. “If you have 10 people cheering and one person booing, all you hear is the booing.”

Armstrong heard even more booing in 2005, when the French newspaper L’Équipe published its finding that Armstrong’s blood had contained the banned drug EPO in 1999, when he won his first Tour. The four-page report, headlined “The Armstrong Lie,” was “very meticulous,” according to the Tour’s director, as quoted in the New York Times. Still, naysayers outside France remained unconvinced — including Indurain, whose record Armstrong had by then obliterated, and who charitably observed, “They have been out to get him in France for a number of years.”

It took a 2012 report by the United States Anti-Doping Agency — followed by Armstrong’s televised confession to Oprah Winfrey — for the booing to take on an American accent. Armstrong finally switched gears, abandoning his denials of the doping allegations — from French hecklers as well as his own former teammate — and beginning the long, uphill battle toward redemption.

And although the boos were back in force this year when he reappeared on the route, a day before the Tour de France began, to take part in a charity ride benefiting leukemia research, he can take comfort in knowing that at least one Frenchman is — or at least was — a fan: former President Nicolas Sarkozy.

During a break in the 2010 Tour, the pair greeted each other warmly; Sarkozy described Armstrong as a “model personality.” Armstrong returned his affection, saying, “We’re just two old guys who like to ride bikes.”

For your security, we've sent a confirmation email to the address you entered. Click the link to confirm your subscription and begin receiving our newsletters. If you don't get the confirmation within 10 minutes, please check your spam folder.
Most Popular on TIME
1
The History of MLK Jr. and Sen. Warnock's Church
2
How mRNA Tech Gave Us the 1st COVID-19 Vaccines
3
What Wandavision Means for the MCU 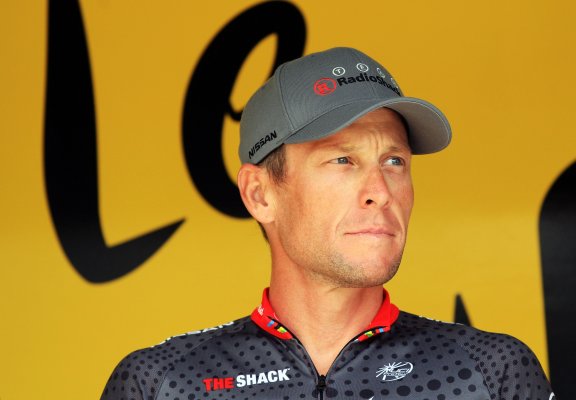 Meet the British Soccer Player Bringing Lance Armstrong Back to the Tour de France Route
Next Up: Editor's Pick