Perhaps it’s the stench of human waste, or the puddles of putrid water at the Kara Tepe transit camp which show the extent of the refugee crisis facing Greece. The six toilets at the entrance of the camp of 2,500 people are not properly connected to the water supply and rarely work; when they do, they quickly become blocked.

Lesbos is the third biggest Greek island and has a population of 90,000 yet it has been overwhelmed in recent days by the arrival of more than 5,000 Syrian refugees. “People have taken to defecating in the open”, says Kirk Day of the International Rescue Committee (IRC), which is launching a new water and sanitation program there this week.

The refugees have to travel six miles by sea from the Turkish coast. First they crowd onto boats operated by people smugglers and then crowd into inflatable dinghies for the final stretch. “It is a death trip; a death trip,” says 26-year-old Fahd Majzoub from Damascus, who paid $1,200 to smugglers and hopes to get to Germany. “If the Turkish police had arrested us along the way, there’s no way I’d try it again – I’d just go back to Syria.”

Upon arrival at Molyvos, the far northern tip of the island, refugees must walk 70 kilometres (44 miles) to Lesbos port to register with port police. For the elderly, sick or families with small children, it can take 2 days to walk to the port in temperatures above 80 degrees. After around 10 days, they should be given documentation of their refugee status by Greek officials which allows them leave for Athens and then, they hope, to more prosperous European countries.

“We walked about 70 kilometres to get here, a night and a day. No-one stopped to take us. Look at my legs and feet – they’re destroyed,” says Abu Ahmed, who left his family in Raqqa in Syria, the capital of the territory held by the Islamic State in Iraq and Greater Syria. He hopes his wife and disabled daughter will follow when he sets up a new home in Germany. “I don’t mean the Greeks are not friendly; they are very nice and they are in a bad economic situation, but we are also human,” he says.

Jasoun Al Ahmad and her niece from Idlib, Syria, in Lesbos.
Tyler Jump

Jasoun Al Ahmad from Idlib in Syria says the boats she travelled on was overcrowded. “The boat can carry 20 people but there were 44 of us in it. We had no water for a long time and my niece was very sick.”

The Greek coast guard and port police are completely overwhelmed by the refugee numbers. The coast guards enter the sea to rescue civilians, although unknown numbers still drown. “There are more in the sea than we have ever recorded; there are many more dead,” says Giorgos Tyrikos Ergas, a fisherman and volunteer providing shelter and support for the refugees. “The dead will keep coming from the bottom of the sea and people will keep drowning because there’s no other way for them to escape war and misery.”

Last year, August and September saw the largest numbers of refugees arrive in the Greek islands, according to IRC, which alongside the United Nations High Commission for Refugees is bracing itself for a similar increase this year.

So far, refugees have been treated with remarkable kindness and generosity from local residents and tourists. But as the numbers continue to grow it may not be long before the goodwill dissipates. One or two cars speeding past a cluster of tents outside Kara Tepe beeped loudly and shouted racist slogans. ‘Get out; you’re not welcome’, was the rough translation. 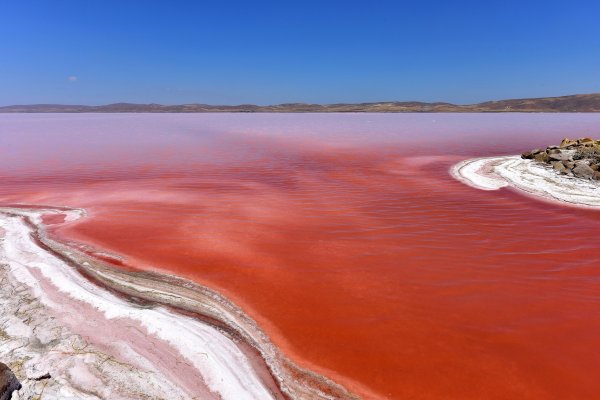 See a Lake in Turkey That Naturally Turned Completely Red
Next Up: Editor's Pick