Amid widespread speculation over who will be the next president of soccer’s scandal-hit world governing body FIFA, France’s Michel Platini has emerged as an immensely popular contender among more than half of the organization’s constituent bodies — should he decide to stand for the election next year.

Four out of six continental confederations under FIFA would back Platini — who currently heads the European confederation UEFA — in the election, a source close to UEFA told Reuters.

The confederations representing Asia (AFC), North and Central America and the Caribbean (CONCACAF), and South America (CONMEBOL) have reportedly declared their support for the legendary midfielder, although none of them were available to confirm. Africa (CAF) and Oceania (OCF) comprise the rest of FIFA’s immediate subdivisions.

The 60-year-old Frenchman, known as one of the world’s best during his playing career in the ’70s and ’80s, has not yet decided whether he will stand for the election to replace FIFA’s disgraced former president Sepp Blatter. Blatter announced his resignation last month as a corruption scandal engulfed world soccer’s apex body, and FIFA has set Feb. 26 for fresh elections.

Read next: Reform Will Top the Agenda at FIFA’s Executive Committee Meeting 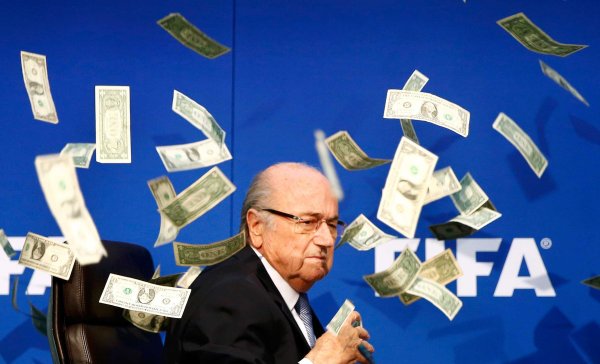 Prankster Showers FIFA Head With Fistful of Cash
Next Up: Editor's Pick