Hillary Clinton said that women have to work extra hard to get ready in the morning.

In an online question-and-answer session on Facebook, the former Secretary of State was asked about her morning routine by a female Facebook staffer who noted that she has to spend more than 30 minutes getting ready while her boyfriend “zips out the door.”

“I wonder about how the ‘hair and makeup tax’ affects other women — especially ones I admire in high-pressure, public-facing jobs,” asked Libby Brittain, who added that as a “young professional woman” she’d like to know how Clinton handles it while “staying focused on the ‘real’ work ahead.”

Clinton agreed that it’s a problem.

“Amen, sister — you’re preaching to the choir,” she wrote. “It’s a daily challenge. I do the best I can — and as you may have noticed, some days are better than others!”

Though lighthearted, the exchange touched on a serious issue that has bothered Clinton for a while. During a town-hall meeting with students in Kyrgyzstan in 2010, Clinton was asked by a moderator if she had any favorite clothing designers. She responded by asking pointedly, “Would you ever ask a man that question?”

Though she jokes about her love of pantsuits (later in the Q&A she noted she “never met a pantsuit I didn’t love”), Clinton’s decision to eschew major fashion choices puts her in line with President Obama, who told Vanity Fair in 2012 that he limits his clothing options to reduce the number of decisions he has to make in the morning.

“You’ll see I wear only gray or blue suits,” he said. “I’m trying to pare down decisions. I don’t want to make decisions about what I’m eating or wearing. Because I have too many other decisions to make.” 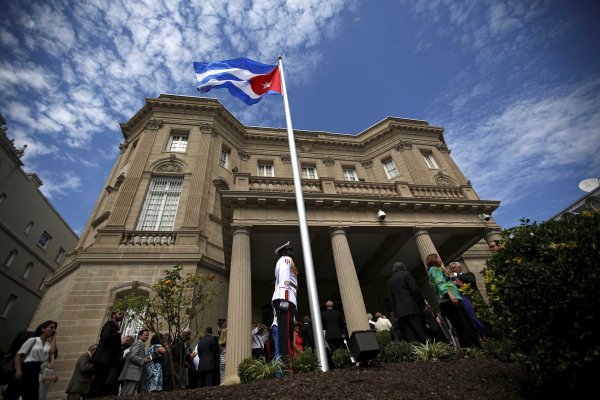 See Inside the New Cuban Embassy in D.C.
Next Up: Editor's Pick