Karzai Said to Have Secret Talks with Taliban

Afghanistan President Hamid Karzai has been engaging in “clandestine contacts” with the Taliban in an effort to reach a peace agreement, the New York Times reports.

Citing unnamed Western and Afghan officials, the Times reports that the contacts with the Taliban have done little to forge a peace agreement in the country. But they may go a long way to explaining Karzai’s actions in recent months that have frustrated the Obama administration, which has tried to plan operations in Afghanistan after all U.S. combat forces leave the country at the end of this year.

First, the Afghan president refused to sign a bilateral security agreement, even after a grand council of elders endorsed the deal last November. So far this year, Karzai has blamed Americans for insurgent attacks, saying the U.S. wants to weaken him as part of a conspiracy to sow instability in the country.

According to the Times report, the first feelers from the Taliban came even before the loya jirga (grand council) met in November, and contacts have continued ever since. It is not clear, however, if those Karzai has been in contact with have the blessing of Taliban leader Mullah Muhammad Omar, which would be necessary for any serious peace deal.

This spring will be a crucial one in Afghanistan. Campaigning for April’s national elections is underway, while American troops continue to hand over security operations to Afghan forces. Even before news broke of Karazi’s clandestine contacts with the Taliban, American officials discussed the frustrations of dealing with the Afghan leader. “We’ve been through numerous cycles of ups and downs in our relations with President Karzai over the years,” Ambassador James B. Cunningham told reporters last week. “What makes it a little different this time is that he is coming to the end of his presidency, and we have some very important milestones for the international community and for Afghanistan coming up in the next couple of months.” 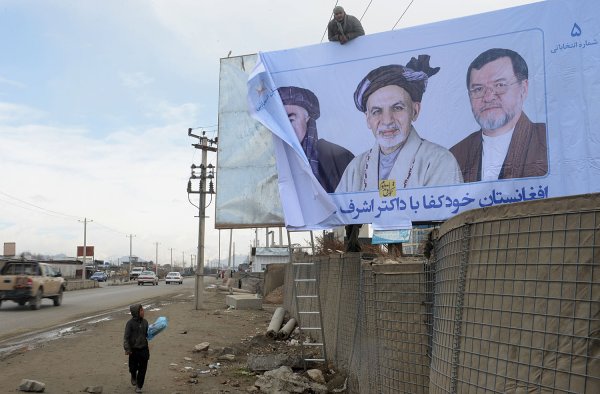 If All Goes Well, Afghanistan Gets Its First Peaceful, Democratic Transition of Power Ever
Next Up: Editor's Pick