An Eskimo harpoons a whale in the Bering Sea off Alaskan shores.
Chlaus Lotscher / Getty Images
By Tanya Basu

New research is turning a centuries-old hypothesis about Native Americans’ origins on its head. A team of geneticists and anthropologists published an article in Science on Tuesday that traces Native Americans to a single group that settled in what’s now America far later than what scientists previously thought.

The researchers looked at sequenced DNA from bones as well as the sequenced genomes of Native American volunteers with heritage from not only the Americas but also Siberia and Oceania, says according to Rasmus Nielsen, a computational geneticist at the University of California, Berkeley, and one of the authors of the study. The researchers contacted people whose heritage indicated they were of Amerindian or Athanbascan—the two ethnic derivations of Native Americans—descent. Specifically, they looked at their mitochondrial DNA (mDNA), which is passed from mother to child.

What they found fundamentally changes what scientists previously thought. The team found that Native Americans most likely had a common Siberian origin, contradicting theories that an earlier migration from Europe occurred.

The timeline Rasmus and his colleagues propose goes something like this: About 23,000 years ago, a single group splintered off from an East Asian population. The group, hailing from northeast Asia, crossed the Bering Land Bridge between northeast Asia and Alaska, eventually making their way to the rest of the Americas. About 13,000 years ago—much more recent than previous theories—Native Americans started to split into different groups, creating the genetic and cultural diversity that exists today.

“We can refute that people moved into Alaska 35,000 years ago,” Rasmus says. “They came much more recently, and it all happened relatively fast.”

Rasmus’ team’s theory contradicts another line of thought, which points to two different populations coming from Siberia, settling in the Americas more than 15,000 years ago.

David Reich, a senior author of a different Nature paper detailing the competing theory and a professor at Harvard, told the New York Times that their results were “surprising”: “We have overwhelming evidence of two founding populations in the Americas,” he said. Reich’s group divides the migration groups into two: one is the First Americans, and another they identify as Population Y, which “carried ancestry more closely related to indigenous Australians, New Guineans and Andaman Islanders than to any present-day Eurasians or Native Americans.”

Despite their differences, both groups agree on the notion that Native Americans can trace their ancestry to Eurasian migrants with Australasian ancestry.

Rasmus emphasizes that their team’s new findings don’t close the case. But as simple as the finding seems to be, Rasmus says it is truly astonishing. “The original hypothesis isn’t true,” he says. “All Native Americans are descendants of one migration wave.” 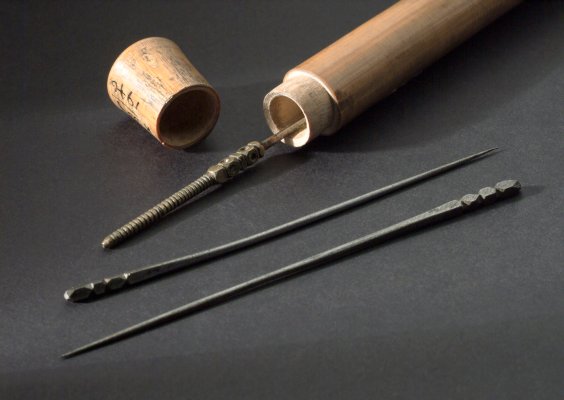 This May Be How Acupuncture Tamps Down Stress
Next Up: Editor's Pick