On Friday, July 17, the Huffington Post announced that it would no longer cover Donald Trump, a candidate for President of the United States, as political news; instead, his campaign would go in the entertainment section. “Trump’s campaign is a sideshow,” wrote Huffington’s Ryan Grim and Danny Shea. “We won’t take the bait. If you are interested in what The Donald has to say, you’ll find it next to our stories on the Kardashians and The Bachelorette.”

The next day at an event in Iowa, Trump insulted Sen. John McCain, a former prisoner of war in Vietnam, saying McCain was only a hero “because he was captured.” Most of the major Republican candidates and the Republican National Committee condemned Trump’s comment with an eagerness and alacrity they would not have shown had Kim Kardashian said it.

The reason, of course, is that Trump has become a problem for them: a political problem, not an entertainment problem. He’s claiming one of the limited spots in the upcoming debates and inflaming racial controversy by vilifying Mexican immigrants. His Nielsen ratings are not the issue here; his poll numbers are.

He’s a problem–and a story–because at this moment in time, Donald Trump is a politically newsworthy figure.

You could, of course, argue that Trump–like Martin O’Malley or Lindsey Graham or any number of political candidates covered as such–has no chance of winning. That he has no intention of winning. That early polls–which had Herman Cain the leader four years ago–are useless. That Trump shouldn’t be in the political debate because he’s outside the pale of civil discourse. And any news outlet is free to say just that!

You could also argue that Trump is getting way too much coverage proportionately, and you would probably be right. A good way to send that message would be by not covering him, or covering him far less, and ceding the delicious traffic that everyone in the news business knows comes by hanging a shiny golden ‘T’ on your stories.

But if Trump is newsworthy at all right now, it’s for political reasons.

A candidate doesn’t have to have a shot at winning to affect the race, even after he or she leaves it. Look at how Ross Perot made the deficit a central issue in the 1992 campaign, or how the conga line of Tea Party favorites pushed Mitt Romney to declare himself “severely conservative” in the 2012 primary.

It says something that Trump, a clown even by the forgiving standards of reality TV, is leading the polls–and it says something political, whether you like it or not. It shows how volatile and open the GOP race is right now. It shows that there is a streak of angry nativism in the party electorate, and the party establishment’s attempts to squelch it are like trying to squash an air mattress: the air will just find another place to swell out, and right now Donald Trump is that gas-inflated prominence.

It smacks of paternalism. You may think you support this candidate, it tells voters, but you really don’t, or you won’t eventually. Or anyway you shouldn’t and since you clearly can’t be trusted to come to right thinking on your own–you wouldn’t even take Jon Huntsman seriously in 2012 when the political press told you to!–we’re going to need to give you this nudge.

Above all, it bolsters the bogus idea that coverage equals approbation. Covering candidates isn’t an endorsement any more than covering ISIS is. You do it because they matter. If they don’t, you should use your limited resources elsewhere.

If Huffington, or anyone else, wants to make the case that Trump is a fraud, or dangerous, or unserious, or simply wrong, by all means go ahead! Serious, smart journalism can argue a point of view. But it has to be grounded in reality, and the reality is that America has come to the juncture where Donald J. Trump is a political figure.

If you believe he’s news, then cover him as political news. If you don’t, but you still want to cover him because you know people will flock to something gilded and loud and shiny: well, Donald Trump knows a thing or two about that business. 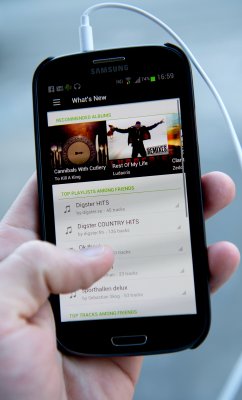 How Exclusives Are Hurting Streaming Music
Next Up: Editor's Pick