Democratic presidential candidate Martin O’Malley was midsentence when the chanting began. “What side are you on black people, what side are you on!” rang the chorus of around four dozen mostly black protesters streaming into a convention hall in Phoenix, Arizona, on Saturday.

A woman named Tia Oso grabbed the microphone as the protestors stormed the room.

“We are going to hold this space and acknowledge the names of black women who have died in police custody, and then Governor O’Malley we do have questions for you!” Oso said as the former two-term governor and his interviewer, Jose Antonio Vargas, watched helplessly. “As leader of this country will you advance an agenda that will dismantle structural racism in this country?” Oso asked.

“Yes,” O’Malley managed to answered, before he was drowned out again.

O’Malley was speaking at Netroots Nation, the country’s largest gathering of progressive activists when the proceedings broke down in a cacophony of boos, cheers and heckles on Saturday. Shortly afterward, Bernie Sanders, another Democratic candidate for president, was also silenced on the same stage by the group of Black Lives Matter protesters. Chanting, the activists shouted out the names of black women who have died in police custody and peppered the candidates with questions about their civil rights records.

It was a moment that spoke to the tumult on the Democratic left and surprised even the organizers of the nine-year-old annual event. As the Democratic party increasingly coalesces around a progressive wish list like expanding Social Security and reining in Wall Street, the growing Black Lives Matter movement is calling loudly for the left to focus on racial injustice as well.

The two presidential candidates found themselves at the center of the chaos, both caught off guard and unable to answer the protestors.

After O’Malley exited, Sanders took the stage and flashed with annoyance. “If you don’t want me to be here that’s okay,” he said. “I don’t want to out-scream you.”

The Democratic presidential candidates have all addressed race on the campaign trail, each in their own way. Former Secretary of State Hillary Clinton—who was absent from the Phoenix conference—has called for automatic voter registration and fundamentally reforming the criminal justice system. Sanders has proposed for a massive jobs programs and raising the minimum wage, and O’Malley has discussed reforming policing and enhancing civilian review boards, among other measures.

In the wake of the police killings of Michael Brown, Eric Garner, Walter Scott and others, activists across the country have condemned mass incarceration and police brutality. They’ve reignited a nationwide debate about race that has brought down Confederate flags, humbled police chiefs and brought cities to a standstill.

But here in Phoenix, it appeared the candidates had misjudged the fervor of the Black Lives Matter movement that has swept the country.

O’Malley stood mutely watching for some ten minutes as protestors jeered, and when he finally edged in a word, he spoke broadly about “all of the lives that been lost to violence” and aroused the protestors anger by saying “all lives matter.” (O’Malley later said he “meant no disrespect.”)

Despite watching O’Malley fumble, Sander immediately began with his prepared stump speech, criticizing the media and calling for a political revolution, trying to speak over the protesters. “What are we doing here?” he grumbled to Vargas, who was unable to control the crowd. Halfway through his time, Sanders looked at the protesters and finally said “Black people are dying in this country because we have a criminal justice system that is out of control.”

Even at Netroots Nation, a Shangri-La for progressive idealism where protesters in the hot Phoenix sun pass around sunscreen and water bottles and gather afterwards for group meditation sessions, some attendees were flummoxed by the outpouring of racial anger. Many in the crowd said later they were confused and uncomfortable, though sympathetic. As the protesters chanted, one man called out “Let the Governor speak!”

The central question seemed to be about how progressives view economic injustice in the United States: as an issue primarily of income inequality, or racial unfairness.

Many of the African-American organizers at Netroots Nation complained that the conference prioritized economic inequality at the expense of racial justice.

“We have to center this conversation around blackness and anti-blackness. We cannot keep disguising structural racism as income inequality,” Angela Peoples, co-director of GetEqual and one of the hecklers, said afterward in an interview. “What we saw at this conference was a lack of acknowledgement of movement for black lives.”

The organizers of the conference said that racial justice stands at the center of Netroots Nation.

“Although we wish the candidates had more time to respond to the issues, what happened today is reflective of an urgent moment that America is facing today,” said a spokeswoman for Netroots Nation. “Netroots Nation stands in solidarity with all people seeking human rights.”

The Netroots Nation conference featured a number of panels on racism, including ones called “Building Black-Brown Coalitions,” “Examining Racial and Gender Bias,” “Reclaiming Media in the new Dawn of Black Liberation” and numerous others. A day earlier, Massachusetts Sen. Elizabeth Warren told a crowd to loud cheers that “black lives matter,” marking an important moment at the conference.

But Black Lives Matter activists are calling on the presidential candidates to make racial justice a central part of their campaigns, and demanded more from the Netroots organizers.

“They did not answer any of our questions,” Monica Simpson, one of the Black Lives Matter organizers said of Sanders and O’Malley. “Race has to be centered in all presidential candidate’s platforms.”

Observers said that O’Malley and Sanders both flubbed their shot on stage.

“It was a missed opportunity for both candidates. What Bernie did is he treated them as hecklers instead of a movement,” Charles Chamberlain, the executive director of Democracy for America, said in an interview. O’Malley’s comments were “incredibly tone deaf,” Chamberlain added.

O’Malley has promised to lay out a plan to reform the criminal justice. O’Malley said afterword in an interview with the digital show This Week in Blackness that he regrets that as Baltimore mayor and Maryland governor he did not push to expunge misdemeanors from nonviolent offenders’ records and seeking to lead the way on a body camera program for police officers.

The kerfuffle at Netroots for Sanders was especially pointed. As a student at the University of Chicago in the early 1960s, Sanders participated in one of the first sit-ins in the North protesting racial segregation, and was active in pushing to desegregate Chicago public schools. But Sanders tends to view racial injustice through an economic lens, putting forth jobs platforms intended to help the poor. When he was able to put in a word on stage, Sanders said the U.S. needs to create “an economy where people have good jobs and good wages”—a sentiment that did not satisfy the protestors.

With the group continuing to chant toward the stage, Vargas said it was time to wrap up. “Okay, good,” Sanders said.

But only a few joined in when the protestors left the hall singing the African-American spiritual, “Oh, Freedom” — “Oh freedom, oh freedom … Before I’ll be a slave, I’ll be buried in my grave.” 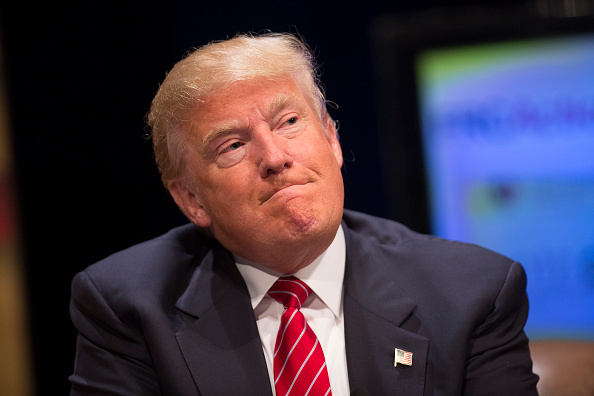 Donald Trump Hits the Limits of Celebrity
Next Up: Editor's Pick