Controversy has always been at the heart of Donald Trump’s professional career, defined by his ostentatious displays of wealth, innumerable public feuds, and a television show built around firing people. So when he entered the political arena, there was little question that it would revolve around the same, but few predicted the Trump-sized firestorm he set off Saturday when he criticized the military service of former Vietnam POW Sen. John McCain.

After a lifetime in the spotlight, Trump is painfully learning the difference between the rules of the game when playing as a candidate instead of a celebrity.

For years, Republicans have courted Trump’s endorsement, entertainment, and deep pockets, tolerating—even encouraging and profiting from—his longstanding list of outlandish comments. They invited him to keynote state party conventions and to endorse their 2012 nominee, even as they stood silently by as he challenged President Obama’s birthplace and indulged in his routine name-calling.

Not even comments deemed insulting to a vital segment of the electorate—suggesting that many who have immigrated to the U.S. illegally from Mexico are “rapists”—were enough to spark widespread condemnation.

But on Saturday the floodgates opened, with Trump criticism flowing from nearly every fellow 2016 candidate, the Republican National Committee, former GOP nominee Mitt Romney, and even Fox News’ Rupert Murdoch. For many in the party, it was a long-anticipated occasion—the inevitable moment when the candidate so obviously and completely stepped in it that sitting silent was no longer an option.

“He’s not a war hero,” Trump said Saturday of the 2008 Republican presidential nominee at a candidate forum in Ames, Iowa. “He’s a war hero because he was captured. I like people who weren’t captured.”

Trump avoided serving in the Vietnam War using four deferments, including a medical deferment for a bone spur. McCain was shot down over Hanoi and imprisoned for nearly six years, undergoing physical and psychological torture at the infamous Hanoi Hilton.

Already feeling the financial burn of the ending of a series of financial and endorsement deals in the wake of his immigration comments, the statement set Trump on the path to becoming a Party pariah.

The swift reaction reflected both the GOP’s pent-up frustration with the man at the top of their primary polls, and the reality that in Republican politics, offending those in the U.S. illegally may provoke mild consternation, but attacking veterans is sacrilegious.

Former Texas Gov. Rick Perry, who has sought to use his criticism of Trump to his own political advantage, became the first GOP candidate to call on his rival to withdraw from the race, as South Carolina Sen. Lindsey Graham called it disqualifying for the highest office in the land.

“Seems to me that there’s an enormous sense of relief among Republicans that he f—-d up so badly,” said one Republican operative.

Party officials, including RNC Chairman Reince Priebus, had been sending signals to Trump for weeks to tone down his rhetoric against those in the U.S. illegally for fear of alienating Hispanic voters. They also were critical of his frequent criticisms of fellow Republicans, violating Ronald Reagan’s 11th commandment.

“There is no place in our party or our country for comments that disparage those who have served honorably,” RNC communications director Sean Spicer said in a statement Saturday in response to the McCain comments, an exceptionally rare critique of a presidential candidate’s own party.

In a defiant statement Saturday, Trump criticized McCain for allegedly failing veterans which noted that he has “great respect” for people who served in the military. It concluded without any effort at appeasing his critics: “Mr. Trump left to a long lasting standing ovation, which will be by far the biggest ovation of the weekend, and much congratulatory praise.”

Read Next: Donald Trump Outdoes Himself in Defiant Phoenix Speech 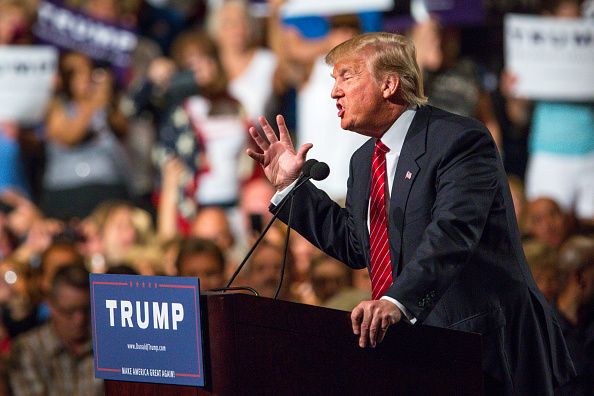 When Donald Trump Praised Hillary Clinton
Next Up: Editor's Pick