Restaurant Food May Be Less Healthy Than Fast Food

If you eschew fast food but relish restaurants, you might think you’re doing your body a favor. But recent research published in the European Journal of Clinical Nutrition suggests that in a lot of ways, eating out is even worse than driving-thru.

“People mainly focus on fast food and want to beat this animal to death,” study author Ruopeng An, assistant professor in the department of kinesiology and community health at the University of Illinois at Urbana-Champaign told TIME. As a result, the nutritional details of non-chain restaurants haven’t been as big of a research area.

So An used dietary recall data from the National Health and Nutrition Examination Survey from 2003-2010 to analyze what people were eating and where. In the dataset, almost 19,000 adults provided self-reports of everything they ate for two days.

But in an interesting twist, eating at full-service restaurants added even more sodium and cholesterol than fast food did. Restaurants were linked to an extra 58 mg of cholesterol each day, while eating fast food only added an extra 10 mg. And while fast food added 297 mg sodium to a person’s daily intake, restaurants shoveled on an additional 412 mg.

Read more What Should I Order at Fast-Food Chains?

Why? When people eat out at restaurants, “they have more time, it’s more relaxing, it’s more like a social event, so they’re less cautious about overeating,” An explained.

But An also found some good news for restaurant-philes: eating at restaurants, compared to eating fast food, was associated with an increase in omega-3s, vitamin B6, vitamin E, magnesium, potassium and zinc, plus a reduction in sugar. “From that perspective, consumption in full-service restaurants isn’t all bad,” he said.

An said he hopes the results will encourage more people to cook, but he’s realistic—we’re not going to stop going to restaurants. “You’re not obligated to eat the whole portion served to you,” he reminded restaurant-goers. “You can always bring some of the food home for tomorrow.”

Read next: There’s A New Seaweed That Tastes Like Bacon And Is Better for Than Kale 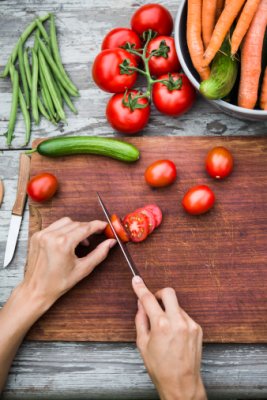 How This Woman Gave Up Processed Food for a Year—On a $16,780 Salary
Next Up: Editor's Pick