Everything We Know About the Chattanooga Gunman

By Naina Bajekal and Tara John

The FBI has identified Mohammad Youssef Abdulazeez, 24, as the gunman who killed four Marines and wounded three others in attacks on military centers in Chattanooga, Tennessee, on Thursday. The gunman was shot dead by police the same morning.

Officials said Abdulazeez was not on any terror watch lists, although he was arrested on April 21 for driving under the influence according to a Hamilton County Jail booking report. U.S. attorney Bill Killian told reporters that officials were treating the attacks as an act of “domestic terrorism.”

Although the investigation is still at an early stage, Abdulazeez appears to be a “lone wolf” acting without clear links to terrorist groups. Experts say lone wolves are likely to suffer from social isolation and mental health problems, but those who knew Abdulazeez have described him as “a good kid”, a handsome, outgoing, polite young man.

Here’s what we know so far about Abdulazeez:

– He was of Jordanian descent and was born in Kuwait in 1990, according to a federal official quoted in the New York Times. He became a naturalized U.S. citizen after moving to the country with his mother, who is from Kuwait, and father Youssuf Abdulazeez, who is Palestinian, reported the SITE Intelligence Group.

– The family moved to a two-storey house in the middle-class, suburban neighborhood of Hixson, Tennessee, a short distance from Chattanooga. Hixson police are currently searching the house for evidence. Neighbors told reporters Abdulazeez and his siblings were well-behaved and polite.

–The New York Times cited unnamed law officials saying Abdulazeez’s father was briefly subject to investigations some years ago in relation to possible ties to a foreign terrorist group but his name was later removed from a terror watch list.

—Counterterrorism officials are investigating a trip Abdulazeez took to Jordan in 2014 that lasted seven months, people familiar with the investigation told the Wall Street Journal. Officials are examining whether anything that occurred on the trip contributed to Abdulazeez’s act of violence.

– Abdulazeez graduated from Red Bank High School, according to the Chattanooga Times Free Press. The young man’s senior yearbook page read: “My name causes national security alerts. What does yours do? –Hijabman”

– Karan Wagner, who attended high school with Abdulazeez, called him friendly, funny and kind and added that his family seemed normal. “I never would have thought it would would be him,” she told the Chattanooga Free Press. “They were your average Chattanooga family.”

– Another high-school friend agreed. Terry Jones, a 25-year-old engineer from Knoxville, described Abdulazeez a sociable, smart and having a sharp sense of humour. He also noted that Abdulazeez was deeply religious, observing prayers five times a day and fasting during Ramadan. “He had a really easy-to-get-along-with personality,” said Jones to the LA Times. “He was kind of the funny guy in … class.” Jones never knew Abdulazeez to drink, smoke or do drugs.

– Muscular and over six feet tall, Abdulazeez wrestled during his last two years of high school. His wrestling coach, Kevin Emily, told the LA Times that he was popular, humble and had many friends. “He always did what I asked him to do; he never gave me any problems,” said Emily, “All the guys seemed to like him. He was not an outsider.”

– Abdulazeez was also an amateur mixed martial arts fighter. Chet Blalock, owner of Blalock International Mixed Martial Arts Academy, told the Times that some of his students trained with Abdulazeez. “He was a tough guy, he wouldn’t tap out; he elected to pass out,” said Blalock. A clip online shows Abdulazeez defeating Timmy Hall in a 2009 fight.

– According to a resumé posted online, Abdulazeez graduated with an engineering degree from the University of Tennessee in 2012 and was searching for work as an electrical engineer as recently as March, when the resumé was updated.

– Little is known about Abdulazeez’s motives and if or when he became radicalized. He does, however, appear to have shown more signs of religiosity in recent months. Dr. Azhar S. Sheikh, a founding board member of the Islamic Society of Greater Chattanooga, told the Times that Abdulazeez began to regularly attend Friday prayers at the mosque a couple of months ago, but showed no signs of extremism.

– According to the SITE Intelligence Group, Abdulazeez maintained a blog containing two posts focused on Islam, both published July 13. The first used the metaphor of a prison to demonstrate the need of studying one’s faith in order to be rewarded after death and quoted a hadith calling the world “a prison for the believer and a paradise for the unbeliever.”

“Don’t let the society we live in deviate you from the task at hand,” the author M.Y. Abdulazeez wrote, adding: “This life is short and bitter and the opportunity to submit to Allah may pass you by.”

The blog also urged Muslims to not listen to “other prisoners”, including so-called ‘scholars’ or even your own family members. It may be a reference to the Muslim clerics who speak out against militant violence and relatives who may have tried to intervene in Abdulazeez’s life.

– The U.S. Department of Homeland Security said it was “enhancing the security posture at certain federal facilities, out of an abundance of caution.”

Read next: The rise of the lone wolf terrorist 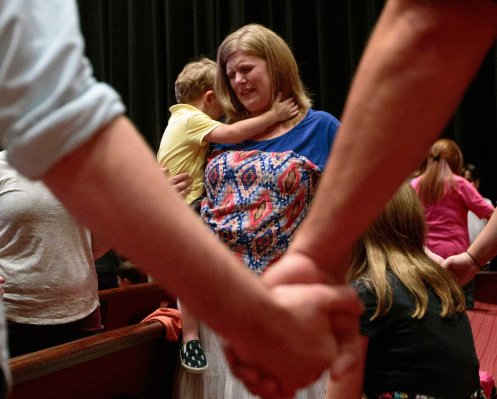 Witness the Outpouring of Grief After the Chattanooga Shooting
Next Up: Editor's Pick