Does This Application Form Mean That McDonald's Is Going to Open in Iran?

A screenshot of a page on the McDonald's website taken on July 17, 2015 shows a franchise application form for Iran
By Nash Jenkins

Despite the misgivings of a Republican majority and the Israel lobby’s tendentious muscle, Congress will probably pass the Iran nuclear deal. The agreement is a litany of compromises, the most dramatic of which being the decision to lift the U.S. sanctions that have left the Iranian economy to wither. In a matter of years — possibly even months — the country could be in for a massive influx of foreign investment.

If history is a reliable metric, then maybe we should expect to see the Golden Arches rise above Tehran sometime in the near-ish future. The Quarter Pounder is, after all, the American olive branch: in 1990, as the Western war against communism waned, McDonald’s opened its first franchises in Russia and then China, eager to spread the good news of deep-fried capitalism with the second world. Both countries had essentially closed themselves off to the various indulgences of the West, and so when thousands of Russians lined up around Moscow’s Pushkin Square on the restaurant’s opening day, they did so not for french fries and Big Macs but for “a piece of America,” as John Stanton, a professor of food marketing, told the BBC. There was a market for Western decadence, and McDonald’s filled the demand.

Same goes with Iran, where The Simpsons was deemed a national threat and bootleg DVDs sell like hotcakes. When authorities announced the deal earlier this week, Iranian Twitter blew up with enthusiasm about the West setting up shop in the country.

The official word is that the restaurant chain has no concrete plans to open any restaurants in the country. This makes sense, of course, given that the timeline for lifting the sanctions is contingent upon Iran’s cooperation with the nuclear agreement at large. Nevertheless, the company’s website has an application available for those interested in setting up a franchise when the time comes.

In the meantime, those in Tehran will have to settle for Mash Donald’s, a cheap facsimile that happily gives the middle finger to the notion of copyright law. But even when the real thing arrives, the fake may not go anywhere. Consider Obama Fried Chicken, China’s ersatz and horribly racist KFC knockoff that managed to turn a profit, even though the authentic Kentucky Fried is the country’s largest restaurant chain. 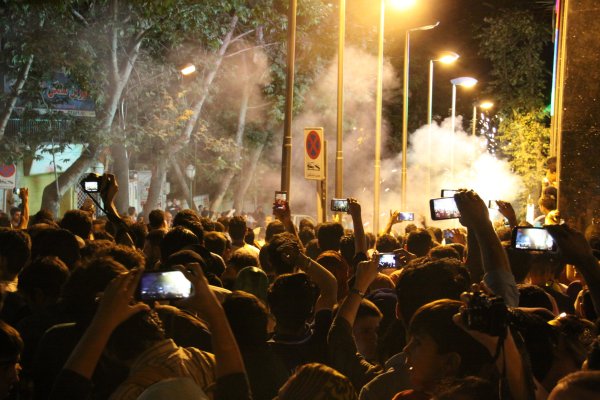 5 Ways the Nuclear Deal Will Revive Iran's Economy
Next Up: Editor's Pick