TLC's Child-Abuse Documentary Should Not Include the Duggars

The Duggar family visits 'Extra' at their New York studios on March 11, 2014.
Dia Dipasupil—Getty Images
Ideas
By Elizabeth Esther
Elizabeth Esther is the author of Girl at The End of the World and Spiritual Sobriety.

Whenever I watched TLC’s 19 Kids & Counting, I never questioned what I saw—I questioned what I didn’t see. I just knew too much. I grew up in a similar religious environment. As a little girl, I knew how to put on a good public performance, and I also knew what happened when nobody was watching.

TLC announced Thursday that it was canceling the show after allegations were made public that Josh Duggar, one of the children on the show, had molested his sisters when he was a teenager. In response, the Duggars said in a statement that their desire in doing the show was to “share Bible principles that are the answers to life’s problems.” My fundamentalist Christian family had that desire, too.

But as I learned from tragic experience, it was all the answers that we weren’t giving about our lives that became the problems. We avoided answering questions like, “Why isn’t anyone calling it abuse when children in the church are walking around with bruises from heavy, daily spankings?” Children in my church were “blanket trained,” meaning we were required to sit quietly on a small mat, and if we cried or left our mats, we were spanked.

Little girls in my church were sexually molested—although most of us never spoke up about it. Even if we did, we were told to “forgive” the men and boys who hurt us. “We aren’t perfect,” pastors like my grandfather would say, “but we are forgiven!”—as if this excused everyone from examining the religious structures that allowed the abuse to continue.

This is why I’m worried about the answers that Jill and Jessa Duggar may give in TLC’s upcoming documentary about child-abuse prevention. TLC has partnered with two victims’ rights groups, Rape, Abuse & Incest National Network and Darkness to Light on the one-hour documentary featuring the Duggar sisters and other victims and families affected by abuse.

But the abuse that apparently happened in the Duggar family wasn’t just about Josh Duggar—it was about an entire system of abuse. The Duggars followed the teachings of Bill Gothard, founder of the Institute in Basic Life Principles. Gothard’s literature spans everything from homeschool curriculums to counseling resources—including a worksheet for counseling victims of sexual abuse. In it, victims are asked to examine whether they were to blame for what happened. Although we don’t know if the Duggars used this worksheet, the fact that Gothard’s “counseling” incorporated victim-blaming helps to illuminate the religious environment the Duggar children are living in.

Gothard’s teachings were so much a part of the Duggars’ worldview that they attended his conferences, where Josh met his wife, Anna. (Perhaps Gothard’s favorite hairstyle for women—long and wavy—probably had something to do with why the Duggar daughters did home perms in the early years of their show.)

But like the Duggars, the public Bill Gothard was different than the private one. Last year, he resigned from his organization after more than two dozen women came forward with allegations of sexual harassment. His own board of directors found him guilty of acting “in an inappropriate manner,” and by unanimous agreement decided he was “not permitted to serve.”

Gothard has publicly denied any wrongdoing, and the Duggars have yet to publicly renounce their affiliation with his ministry. So how can Jill and Jessa Duggar participate in a documentary about child-abuse awareness when they have yet to distance themselves from a system that seems to directly enable blaming victims?

Until the Duggars have fully stepped away from an abusive religious environment—or at least publicly renounced their affiliation with it—it’s impossible for Jill and Jessa to present a helpful model for recovery. Why? Because they are still being victimized. In my case, it took years of therapy after leaving my fundamentalist church before I began to understand that I was abused. It took even longer for me to understand the systemic forces and religious structures that enabled it.

Unless TLC features the Duggars’ response to sexual abuse as an example of what not to do, then the documentary will simply serve Jim Bob and Michelle’s purpose: giving us the answers they want us to hear and not the answers abuse victims need. 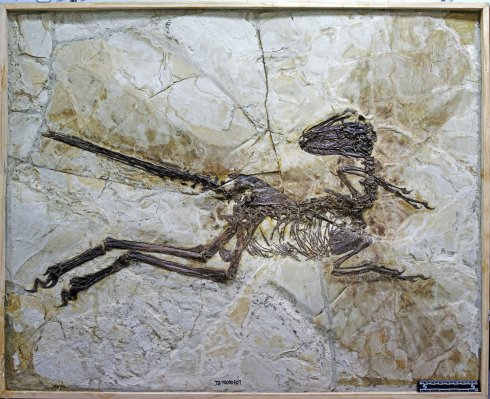 Study: Velociraptor Was a 'Fluffy, Feathered Poodle From Hell'
Next Up: Editor's Pick