Each time nominations for Hollywood awards are handed down—with all the self-importance and fanfare of a presidential campaign announcement (or 17)—the conversation quickly shifts to the snubs. This year, for example, The Americans and Jane the Virgin were conspicuously absent from the list of Primetime Emmy nominations. But beyond the one-off oversights and the well-deserved accolades, the holistic picture of nominees says something important about the state of television today. Things are getting better.

Minorities, transgender people, feminists and women of a certain age are getting more screen time, and more recognition for their work. To be clear, they are not where they should be: According to the 2015 Hollywood Diversity Report released by the Ralph J. Bunche Center for African American Studies at the University of California, Los Angeles, television network and studio heads during the 2012-2013 season were 96 percent white and 71 percent male. Minorities were underrepresented by a factor of nearly 6 to 1 among lead roles on broadcast scripted TV shows, based on the percentage of minorities in the general population.

But a comparison of this year’s field of nominees to last year’s shows real, if incremental, progress. In 2014, of the 40 actors and actresses nominated for lead and supporting acting awards, three were black. This year, there are three black actors alone—Andre Braugher, Tituss Burgess and Keegan-Michael Key—in the running for best supporting actor in a comedy series. Nine out of the 40 nominees this year, a threefold increase over last year, are black actors and actresses—an increase worth noting even if it’s not quite evidence of a sudden sea change.

The nomination of Transparent for best comedy series marks the first recognition of a show that revolves around a transgender character’s life. The Amazon series joins Orange Is the New Black, which includes the transgender actress Laverne Cox among its ensemble, in the growing number of high-quality shows about trans stories. After five consecutive years of the award going to Modern Family, Transparent could easily win, showing that American audiences are embracing an even more modern family.

In the running for best actress in a comedy are Amy Schumer (Inside Amy Schumer) and Lily Tomlin (Grace and Frankie), a newcomer and a returning old-timer, respectively, whose nominations are similarly significant. In Schumer’s case, though it’s not altogether new to see an outspoken feminist among the nominees, it is more unusual to see recognition for a comedian whose show, week after week, works tirelessly to lambast the patriarchy, taking on everything from rape culture to the role of women in the military to the decreasing number of roles for older actresses.

Speaking of which, Tomlin’s appearance among the slew of nominees highlights the upside of the risk Netflix took in creating a show featuring two actresses over 70—and the fact that such a show is considered a risk at all. Tomlin, who has won Emmys in the past as a producer, writer and voiceover actor, is not only more than 25 years older than the next-oldest of her fellow nominees, but 20 years older than the next oldest nominee in the category at any point during the past decade.

This year’s Emmy nominations do not mean that sexism, racism and transphobia are obsolete in Hollywood. They do not mean that feminism rules the day, or that the number of compelling roles for older actresses is plentiful, or that every child growing up in America sees a reflection of him- or herself when they turn on the television. But they do mean that things are getting better—one role, one nomination, one award at a time. 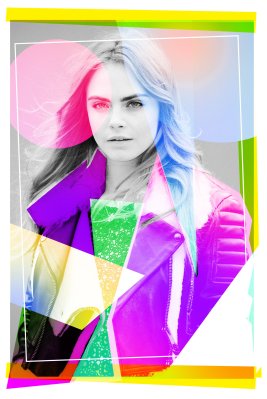 How Paper Towns Could Propel Cara Delevingne From Model to Movie Star
Next Up: Editor's Pick