The Uber driver who picked up Jeb Bush Thursday on a San Francisco street corner doesn’t normally vote and didn’t recognize the Republican frontrunner. But the experience of driving a man who could be President, and talking about it with a reporter, may get him to the polls this year.

He said he will probably pull the lever for Hillary Clinton.

Bush is traveling around San Francisco Thursday using the ride-sharing app, the latest embrace by the Republican of the company, which has fought taxi regulations and has come under fire from some Democrats for the scant benefits it offers its network of independent drivers. The GOP has emerged as the company’s staunchest defender, as the party tries to align itself with the hip, and liberal, Bay Area culture as they appeal for younger voters and top donors.

Munir Algazaly, 35, an immigrant from Yemen who has been driving Ubers for a year and a half, said “I had no idea,” that the 6’4″ passenger riding shotgun was the Republican presidential candidate.

Algazaly drove Bush to Thumbtack, a company that matches independent and small-business professionals with consumers—a startup founded by former aides to President George W. Bush that appeals to the GOP’s free-market sensibilities. Bush tweeted that he gave his driver a five-star rating, the highest possible, after the ride.

For nearly an hour before Bush arrived, every car that had the misfortune of slowing near the reporters in the rush-hour traffic was nearly surrounded by television cameras and reporters hoping to view him stepping out of the car. The false alarms continued, even after a campaign aide confirmed that Bush was arriving in a Toyota Camry, with the gaggle of cameras crowding around random vehicles, including this reporter’s taxi when he arrived late bearing a coffee.

About a dozen employees of Thumbtack were waiting by the loft windows of their headquarters to take photos of Bush when he arrived.

In the liberal stronghold, the response from passersby when they realized Bush was infiltrating their Democratic redoubt was mixed. One woman laughed heartily before flashing a “rock-on” hand sign, after briefly being accosted by the cameras in another case of mistaken identity. Another passerby, when informed that the press was waiting for Bush, stuck out her tongue and sneered before driving away. A few more drivers honked and yelled.

Responding to a question from a reporter, Bush reported that his father, former president George H.W. Bush, is “stable” and “doing okay, I think” after a fall Wednesday in which he broke a bone in his neck.

Algazaly said he didn’t recall what Bush’s specific Uber rating was, adding that they talked about the city and traffic as they drove.

While Bush took questions for 10 minutes from reporters after his town hall at Thumbtack, an aide called another Uber for Bush, asking the driver, who was quickly surrounded by cameras and reporters, “Can you handle this?” The driver, who said he was a Democrat, was game, and as reporters shouted questions at him and photographers blocked traffic to take his photo, he slowly pulled away from the curb, saying, “We’ve got to go.”

Read next: Jeb Bush Wishes He Could Speak Like Obama 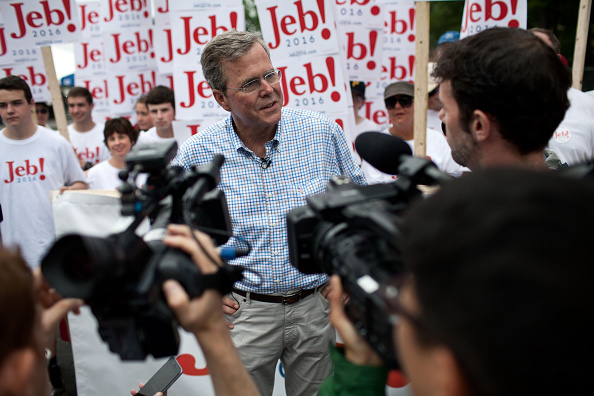 How Jeb Bush's Super PAC Will Spend $103 Million
Next Up: Editor's Pick