People wave Confederate flags outside the hotel where President Barack Obama is staying on July 15, 2015, in Oklahoma City.
Evan Vucci—AP
By Jacob Koffler

The handful of demonstrators—who told reporters they believe the Confederate flag is a symbol of heritage, not hate—were seen with the flags as Obama’s motorcade pulled up to the hotel where he stayed Wednesday night.

The flag wavers were led by a black man named Andrew Duncomb, who calls himself the “Black Rebel.”

“We don’t believe it’s a symbol of racism,” Duncomb told KFOR. “They’re blaming the racist problems on the flag and not on the real problems of America.”

Obama was in Oklahoma to deliver a speech at Durant High School on the expansion of economic opportunity, including for the Choctaw Nation of Oklahoma. On Thursday, he was set to make history as the first sitting president to visit a federal prison, heading to a correctional facility in El Reno. Obama has publicly criticized flying the Confederate flag, saying it “belongs in a museum.” 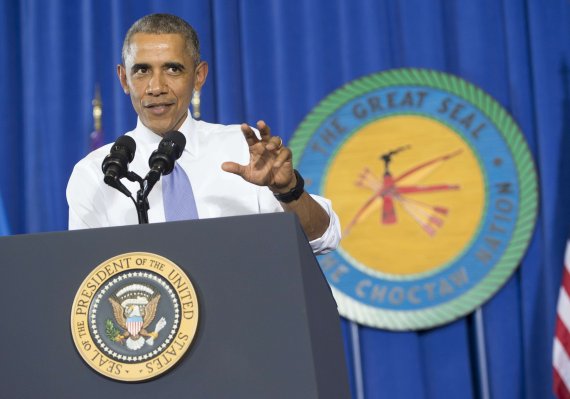 Obama to Expand High-Speed-Internet Access
Next Up: Editor's Pick