Gustave Caillebotte is one of those artists–Vermeer was another–who got lost for a while. He was just 45 when he died, in 1894, after suffering a stroke, and in the years after his death his work was largely forgotten. But his irresistible canvases turned out to be sleeper cells, waiting to surface again. Their moment arrived in the 1960s, when his disorienting perspectives–straight down on the top of a city tree, for instance–were recognized as a foretaste of 20th century rule breaking. But more than that it was his enigmatic and unsentimental take on the world–and specifically the world of fast-changing Paris, the cockpit of 19th century modernity–that marked him as an artist speaking as much to our time as his own. More, actually.

Giving this man his first major American retrospective since 1994 is the public service performed by “Gustave Caillebotte: The Painter’s Eye” at the National Gallery of Art in Washington, which runs through Oct. 4, then moves to the Kimbell Art Museum in Fort Worth. Caillebotte was wealthy, rich enough to bankroll several of the independent exhibitions the Impressionists organized during the time the French Academy kept them largely excluded from its official salons. But he was no hanger-on with a fat wallet. Like William Burroughs, the great Beat writer who just happened to be heir to the Burroughs cash-register fortune, he was a rich young man with a real and sometimes unnerving gift.

Although Caillebotte exhibited alongside the Impressionists, he rarely adopted the loose brushwork and bright palettes of Monet, Renoir or Pissarro. He was academically trained, and when it suited him he was perfectly capable of a conventional illusionism on the canvas. That’s what he brings to his masterpiece, Paris Street, Rainy Day, a wall-size canvas he completed in 1877. It’s an epic of everyday life, a snapshot of people strolling in wet weather. It’s punctuated by English-style steel-ribbed umbrellas, a relatively new fashion at the time, making this a bit like a picture of people today poking at their smartphones. In this industrial-age scene, the mute material world is like another actor. A metal lamppost not only bisects the picture but seems to preside over it. The cobblestones push forward as a mass-produced chorus, as anonymous as the people who walk on them.

In the foreground is a man cut in half by the edge of the picture. Like Degas, Caillebotte understood that photography had things to teach painting. The very haphazardness of photos–the way they slice people off or catch them bunched in crazy combinations, the way they could make a random lamppost a central player–was the thing that made photography the natural language of the modern age, an age of darting movements, scrambled hierarchies and anonymous passersby. The plunging diagonals in some of Caillebotte’s city scenes, the avenues and apartment buildings receding sharply into the distance, owe a debt to the distortions of wide-angle lenses. They make his streetscapes vaguely troubling–both visually exact and unreal, a premonition of the high-def incongruities that Surrealists like Magritte and Dalí would produce decades later.

The most fascinating picture in the show is On the Pont de l’Europe, which Caillebotte completed in 1877 but never exhibited. Perhaps he thought it was too much for people to absorb. We see three men on a steel bridge, again with one figure cut in half. The bridge is pressed so close to the surface of the picture that we have hardly any breathing room. The men have their backs turned to us, near enough to touch but so enclosed within themselves that they’re utterly unknowable–in other words, city dwellers.

It’s customary to say of Caillebotte that because he didn’t need to make a living from his art, he didn’t have to worry about pleasing the taste of his time–he could paint for himself. Which is a good thing, because as it turns out, he was also painting for us. 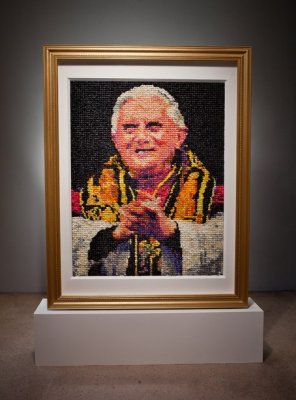