The political spouse once had a single space to fill, smiling onstage beside her husband and children as the confetti and balloons streamed down. Hillary Clinton broke that mold in 1992, when she offered voters a two-for-one deal: a favorite cookie recipe and a proposal for universal health care.

These days, the spousal rules seem to have fallen by the wayside completely. The current wives (and a husband) of Republican candidates include two Wall Street executives, two nurses, an almost-Ph.D. in marketing and a political consultant who once counted one of her husband’s rivals as a client. Of the group, at least eight have taken on major campaign roles such as fundraising, helping to write policy and keeping morale high. There are also those who stay focused on the home front, caring for children along with occasional charity work. If there is a common theme, it is the lack of uniformity. Today’s spouses get to support their partners however they please.

Credentials: A graduate of the Instituto Antonia Mayllen in León, Mexico, the former Florida first lady was a stay-at-home mom, raising three children. She famously hates politics and prefers the arts to argument.

You should know: She installed Dalí and Kahlo at the governor’s mansion.

Credentials: With degrees in music from Yale and management from Johns Hopkins, she has worked as a travel agent, realtor and violinist.

You should know: She and her husband founded the Carson Scholars Fund, which has given more than 6,700 grants.

Credentials: After graduating from the University of Delaware, where she succeeded the future governor as student-body president, she got an M.B.A. from Seton Hall and spent her career on a Wall Street bond-trading desk. She recently quit her managing-director job to focus on the campaign and has been spotted leading Christie around New Hampshire.

You should know: During the Sept. 11, 2001, terrorist attacks, her offices were two blocks from the World Trade Center; she was unable to get in touch with her family for hours.

Credentials: A graduate of Claremont McKenna College, with graduate degrees in business from Solvay Brussels and Harvard, she worked in President George W. Bush’s Administration before joining Goldman Sachs. Now she keeps an office at her husband’s campaign headquarters and weighs in on strategy.

You should know: Heidi and Ted Cruz met while working together on the Bush campaign in 2000.

Credentials: After attending Penn Technical Institute, he started as a tow-truck driver but retired at age 48 as a vice president of AT&T. He was constantly at his wife’s side as a de facto bodyguard when she became CEO and remains a key part of her team.

You should know: He is willing to do anything he can for his wife, including taking a reporter with him to Costco to buy toilet paper in an effort to demonstrate that the family is not living lavishly.

Credentials: After degrees from Ouachita Baptist and John Brown universities, she made her family the focus of her time, picking up jobs here and there as a substitute teacher, pharmacist assistant and construction manager. Later she served as the Texarkana PTA president and was the 2002 GOP nominee for Arkansas secretary of state.

You should know: As a young bride, she was diagnosed with spinal cancer. Her husband drove her every day for radiation therapy.

Credentials: After chemical-engineering and business degrees from Tulane University, she has been working toward a doctoral degree in marketing at Louisiana State. Former employers include agricultural giant Monsanto and chemical firm Albemarle. She also runs a science-and-engineering-education foundation and often travels with her husband and three children on the campaign trail.

You should know: Bobby Jindal and the former Supriya Jolly knew each other in high school but did not start dating until almost a decade later.

Credentials: After graduating from Ohio State, she worked in health care marketing and PR. An avid runner, she avoids much involvement with her husband’s political races.

You should know: She bans phone calls in the house after 8:30 p.m.

Credentials: After graduating from Rhodes College, she was working as a marketing manager for Sprint when she met her future husband. She later became a political consultant, counting Ted Cruz as a client until recently. Now she lends her hand as speechwriter, communications guru and manager of her husband’s sometimes cranky moods.

You should know: The Senator’s given name is Randal, and he went by Randy when he met his future wife. She shortened it to Rand.

Credentials: With nursing degrees from West Texas State University and the University of Texas at San Antonio, she spent most of her adult life as a nurse and public-health advocate. Her husband’s most important adviser, she coaxed him to run for the White House in 2012 and pushed him to try again this time.

You should know: She opposes abortion, but unlike her strictly pro-life husband, she has described it as a “woman’s right.”

Credentials: After graduating from Miami-Dade Community College, she became a Miami Dolphins cheerleader and a bank teller before landing a part-time job at a foundation run by one of Rubio’s most generous donors. Rubio says his wife’s biggest job during the campaign is being mom to their four children.

You should know: The high school sweethearts were engaged only after Rubio finished law school.

Credentials: With a nursing degree from Duquesne University and a law degree from the University of Pittsburgh, she was recruited by her husband to join his former law firm. After their first child was born, she decided to be a stay-at-home mom. Now she offers campaign advice that includes keeping him on message. A child with a genetic disorder keeps her home as a full-time caregiver.

You should know: She has written three books about her children and young people’s manners.

Credentials: A graduate of the University of Ljubljana in Slovenia, she was a model who appeared on the cover of Vogue. Now she focuses on a jewelry line she sells on QVC and plays a minimal role in Trump’s political efforts.

You should know: She could make history as the first presidential spouse to have appeared in a Sports Illustrated Swimsuit Issue.

Credentials: She spent two decades working for insurance companies and the American Diabetes Association before joining the American Lung Association as its fundraiser. Today, she is a force inside Walker’s political machine and a frequent surrogate, especially to female voters. When Walker considers his next moves, he often turns to her for a final gut check.

You should know: Scott Walker met Tonette at a karaoke night and later proposed to her at the same bar. Like her husband, she does not have a college degree.

NOTE: ONLY CANDIDATES POLLING AT ABOVE 1% IN THE REAL CLEAR POLITICS AVERAGE OF POLLS WERE INCLUDED. 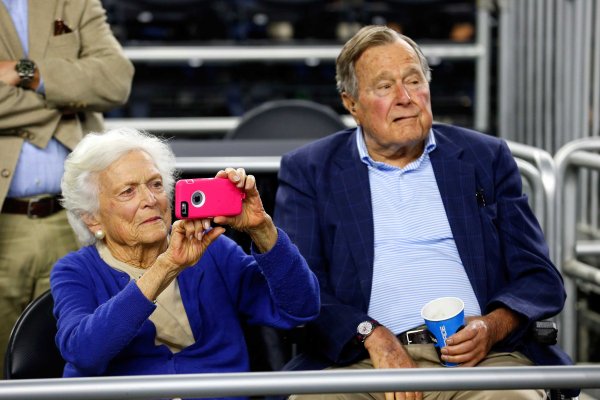