What’s been the coolest thing to happen since you scored three goals in the World Cup final–and became one of the most famous people in America?

The ticker-tape parade in New York City. People in windows dressed in red, white and blue chanting our names, paper flying everywhere. To know that people are so inspired by me and my teammates is incredible.

What’s been the biggest challenge in managing instant fame?

I operate on a good nine hours of sleep, and I’m operating on two to four hours possibly–lots of coffee, lots of power naps. I haven’t run since I played the final. I haven’t touched a ball. I’m just really soaking in a Hollywood lifestyle.

When I arrived at the Philadelphia airport and one of the workers who was driving a golf cart asked if I could sign his golf cart. He had a marker and all. He was ready.

Your family and fiancé did not attend the World Cup, at your request. Didn’t you miss them?

I didn’t miss them at all. I see them on a daily basis. I can always wait. We train for this every four years, and I don’t want any distractions. I don’t want to have to worry about tickets and travel and if they’re having fun or squeezing time in to see them when I could be getting a massage and getting into an ice bath.

What’s next for women’s soccer and the U.S. pro league, the National Women’s Soccer League?

This World Cup was a huge turning point. It’s going to continue to grow. Paying players a little bit more would definitely play a big part in that. There are lots of players who are about to retire after this year because they just can’t afford to play on the salaries they’re making.

FIFA gave the German soccer federation $35 million for winning last year’s men’s World Cup. The U.S. got $2 million for your win. Does that bother you?

Yeah, it does. We work just as hard, if not harder. We sacrifice a lot as female athletes. We have moms on our team who have their kids at home and have come back from pregnancy and have been great.

Is the women’s game better than the men’s game?

It’s different. Women don’t flop as much as men. It’s a pride thing. I’m not sure why some men do it.

In a New York Times story published during the World Cup, former U.S. coach Pia Sundhage said you “could be one of the worst” players to coach. Did her comments motivate you?

That stuff brings out the fire in me. If someone’s going to say something, it sure as heck is going to backfire on you. And it tastes so much sweeter when that happens.

You’re planning on getting married after the 2016 Rio Olympics. Any thought of moving up the date? Plenty of reception halls would be happy to offer a Carli Lloyd discount.

[Laughs.] Not really. We want to do it after the Olympics so I’m in full focus mode. But there have been a lot of wedding planners and dress boutiques that have reached out. So, I mean, if I can get a free wedding dress …

You’ve now scored the winning goals in two Olympic gold-medal games and had a huge World Cup final. Do you have some kind of clutch gene?

It’s just training over and over to be a fierce competitor, to be an underdog. I want to leave the game as one of the best players ever. And in order to do that, you need to score in big moments. You need to rise to challenges. That’s what I love to do. 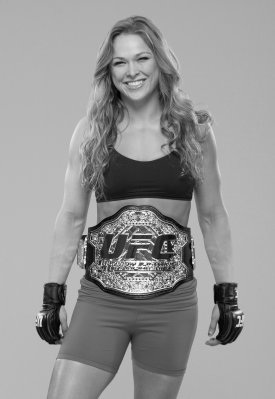 10 Questions With Ronda Rousey
Next Up: Editor's Pick