For six of the 15 years he spent behind bars, Jason Hernandez called Federal Corrections Institution El Reno home. And before President Obama granted him and over a dozen others clemency in 2013, he was destined to die there.

But when he heard President Obama would be traveling to the El Reno facility on Thursday, he yearned to be back behind those walls again, if only for a day.

“I immediately thought there was no place I’d rather be than in El Reno when the president is there,” Hernandez tells TIME. “President Obama granted one of my dreams. One of the others is to meet him.”

In 1998, when he was just 21 years old, Hernandez was sentenced to life in prison without the possibility of parole for selling methamphetamines and crack cocaine. After serving nine years in the Beaumont maximum-security facility in Texas, Hernandez was transferred to the medium security facility at El Reno to carry out the remainder of his life sentence.

Yet, that sentence was cut short thanks to Obama, who included the now 38-year-old in his first splashy round of mass sentence reductions for low-level, non-violent drug offenders who likely would have been released had they been sentenced under current law. Hernandez doesn’t at all deny the fact that he was guilty of a crime—“I thought I was bettering people by giving them drugs,” he says—but he felt his sentence was excessive and the President agreed.

Now, Hernandez is living in a halfway house in McKinney, Texas, splitting his time between work as a welder and as a kitchen worker and mentor at restaurant aimed at helping kids who have gotten caught up in the juvenile justice system. Hernandez says he wants to use his newfound freedom to help keep young men of color from heading down his same path—something he notes he likely wouldn’t have even known he’d have a passion for had it not been for programs he participated in at El Reno.

Plus, he says, “I made that promise to the president.”

Over the past several days, Obama has made criminal justice reform his focus—from the 46 commutations he issued on Monday to the sweeping reform platform he laid out on Tuesday—and it all comes to a head on Thursday when he becomes the first sitting U.S. president to visit a federal correctional facility. During his visit to El Reno, a medium security facility in Oklahoma, Obama will meet with law enforcement agents and inmates and be interviewed for an upcoming VICE documentary about the American criminal justice system.

The site wasn’t at all chosen at random. The White House, the Department of Justice, and the Bureau of Prisons worked together to pick El Reno as the first federal prison to host a sitting president for a visit for a number of reasons, according to a White House official. For starters, about half of its 1,301 inmate population is drug offenders, which is proportional to the entire federal prison population. The racial and ethnic make-up is also representative of the federal prison population and inmates there are a variety of ages and carry myriad lengths of sentence. What’s more, it offers both an evidence-based residential drug abuse treatment program and a critical reentry program known as Federal Prison Industries that helps inmates prepare for life on the outside. Inside, according to an inmate handbook, inmates have access to educational and vocational training programs from GED and associate’s degree courses to business management and welding training.

“The President believes that, at its heart, America is a nation of second chances, and the reentry programs and drug abuse programs housed at El Reno are vital to ensuring that inmates have a second chance to give back to the country they love,” said a White House official.

Those second chances, however, have been all but lost on thousands of low-level, non-violent drug offenders sentenced to lengthy sentences as a result of harsh, decades-old drug laws. In many cases, first-time offenders caught peddling or transporting drugs have been sentenced to life without the possibility of parole.

Since 1980, the U.S. prison population has more than quadrupled, due in large part to the massive numbers of drug offenders who’ve ended up behind bars for lengthy amounts of time. And although Congress passed a law in 2010 that reduced the punitive disparities between crack and powder cocaine, the law wasn’t retroactive, leaving many offenders who would be out under current law to languish behind bars. “That’s the real reason our prison population is so high,” Obama said Tuesday. “In far too many cases, the punishment simply does not fit the crime. A disproportionate number of inmates, too, are black and Latino men.

In a photo taken on the inside that Hernandez shared with TIME, nine black and brown men donning tan jumpsuits stare solemnly at the camera. All of them, Hernandez says, were sentenced to life behind bars for selling crack cocaine. Among them is Kenneth Evans, a former low-level drug dealer who is a few months shy of his 50th birthday. He’s been behind bars for 23 years. Evans lived next door to Hernandez when he was still locked up. When Hernandez found out he had been granted clemency, he cried to Evans—saying he felt guilty for leaving him behind.

In a message to TIME sent via the prison email system, Evans said he simply wants the president to know that “none of us are claiming innocence. None of us are neglecting or ignoring the harm that we caused our communities. But ALL of us are simply asking for fairness, true justice, and a second chance.”

Evans has applied for clemency through the Clemency Project, an Obama administration effort to identify more non-violent, low-level offenders for parole. According to the New York Times, some 30,000 federal inmates have applied for sentence relief through the initiative. But the process for clemency is slow, as noted in the number of commutation orders Obama has so far granted.

Yet, among inmates, hope is not lost. Douglas Ray Dunkins is not in the photo, but he’s also serving a life sentence in El Reno. His conviction for manufacturing and distributing crack as a young man was his first felony, according to an American Civil Liberties Union report in which he’s featured. He’s been at the Oklahoma facility since February 9, 1993.

When Jason was released, he told TIME via prison email, it was a bittersweet moment, “but it did give me hope that if [his] sentence could be commuted mine could as well.”

Both Congress and the White House have taken steps to try to curb the impact old drug laws have had on the prison population. A bipartisan group of lawmakers in the House recently launched a criminal justice reform caucus. Senators from both sides of the aisle convened on Tuesday to make the case for passing criminal justice reform this legislative session. Obama on Tuesday lauded the momentum around enacting meaningful reforms that reduce both the prison population and the crime rate, while noting that more work needed to be done. He’s likely to repeat the charge during his visit on Thursday.

Though Hernandez won’t be traveling to meet the President at El Reno, he hopes to someday meet him. But what he wants most is an opportunity is for other deserving inmates to experience life on the outside.

“There are individuals there that I believe are more worthy than I was—they had less drugs and they’ve done more time,” he says. “It’s my hope that one day the president gives life back to those individuals.” 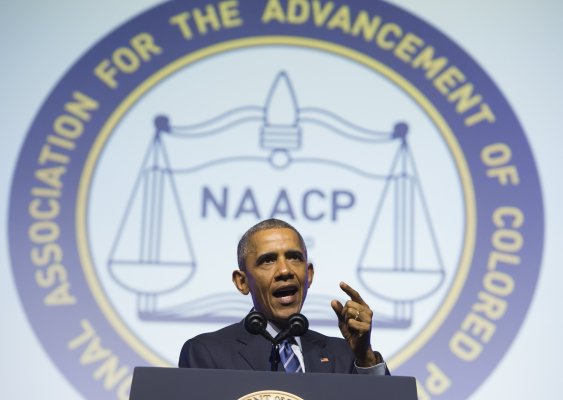