For a large swath of young American women, light smoking is growing in popularity, according to a new study.

In new research published in Preventing Chronic Disease, researchers from the University of Texas at Austin were intrigued by other studies that noted a spike in casual smoking in recent years. To find out more about very light smokers, they analyzed a sample of 9,789 women between ages 18 and 25 from the 2011 National Survey on Drug Use and Health. The researchers asked the women if they had smoked part or all of a cigarette in the past 30 days; those who said they had were classified as current smokers, while those who hadn’t, but had smoked previously, were considered “former” smokers.

While heavy smoking—a pack a day—has decreased in the U.S., the researchers found that 27% of all people in the study—and 62% of the current smokers—identified as very light smokers, a habit of five or fewer cigarettes a day. It also can mean skipping smoking some days, then picking up a cigarette every so often. In fact, this kind of casual smoking—what many people often refer to as “only smoking when drunk”—has become predominant, particularly because of its perceived lack of health effects, the study authors note. Many light smokers consider smoking “only once in a while” as not harmful; while they understood smoking to be risky, the authors write, they did not consider the risk as high as non-smokers.

Interestingly, a specific group of women emerged as “light” and “very light” smokers: 18- to 20-year-old single women with some college education.

The research team thinks young women entering adulthood are at particular risk for smoking, perhaps because young adulthood is a time of stress and anxiety and because smoking fewer cigarettes is cheaper than a heavier habit.

But even a very light habit isn’t safe, the authors warn. Research has indicated repeatedly that picking up even one cigarette puts a woman at increased risk for health problems. The fact that the women who are smoking lightly tend to be young and of childbearing age is especially worrisome, they note, since smoking can not only affect conceiving and fertility but can also put women at higher risk for disorders such as cancer of the cervix.

Beyond pregnancy effects, very light smokers are susceptible to the same issues that affect heavier smokers, including depression, psychological distress, and dependence on other controlled substances, the study found. And while the research team did not correlate smoking with binge drinking, they found that heavy and light smokers were similar in their patterns of past alcohol bingeing.

“Social features of college life, including weekend partying, may promote smoking at a very light level among college women,” the authors write. “Emotional distress and multiple substance misuse may serve to both initiate and maintain very light smoking.”

The authors write that anti-smoking campaigns—which tend to focus on heavier smokers—still haven’t yet reduced the “cool” factor associated with taking a drag, even an occasional one.

“Advertising aimed at women attempts to associate smoking with independence, attractiveness, and sophistication,” the study notes. “To meet the challenge of the tobacco industry, smoking intervention programs and policies directed at emerging-adult women need to be based on an understanding of the diverse characteristics…associated with very light smoking in this population.” 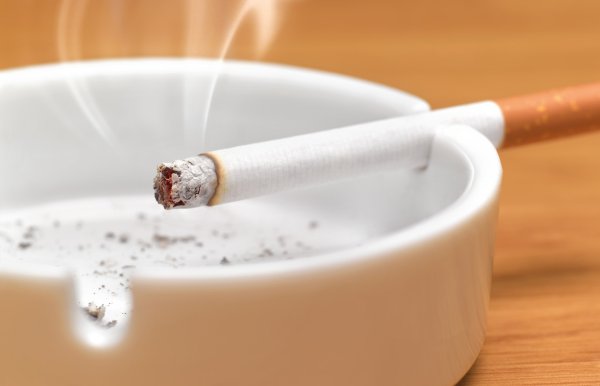 Most Americans Agree You Should Be 21 to Buy Tobacco
Next Up: Editor's Pick