When Ant-Man opens in theaters on July 17, viewers are in for a different kind of action movie. The protagonist’s powers of shrinking and controlling ants aren’t the sexiest in the Marvel canon, and the film’s star, Paul Rudd, is goofier than the average superhero. But with director Peyton Reed at the helm, the result is two hours of delirious fun.

TIME caught up with Reed before the movie’s release to talk about Rudd’s charm, shooting in 3D, playing with genre and female characters in comic book movies.

TIME: What was your relationship with comic books as a kid?

Reed: I had a very intimate relationship with comic books as a kid. I read comics at a very young age, starting in elementary school. I was almost exclusively a Marvel Comics reader—I read a few DC titles but I just gravitated toward Marvel because I loved the stories, I loved the characters, I loved that they were all flawed characters and that there was a sense of humor in the writing and in the editorial style. I was pretty obsessive; I knew comics came out on Tuesdays and Fridays. I would have my dad drive me to the newsstand.

I read that you especially liked Ant-Man. What was the appeal?

As a kid, I loved the powers. Shrinking taps into a childlike thing. I suppose there’s a correlation with how kids play: you’re always down on the floor, on the carpet, playing with whatever toys you’re playing with, imagining those really tiny things are much larger worlds. I loved shrinking, and I also loved how weird the idea of controlling ants was—which, by the way, was one of the biggest challenges of the movie. Is any sane audience member is gonna say, “How is that gonna come in handy?” We really show the audience in a big way what you could do. I just loved in the comics when he would go in ant tunnels; it was such a science fiction concept. I also loved that in the comics he was a founding member of the Avengers, and there was this inadequacy that he felt, because he’s fighting alongside Thor and the Hulk and Iron Man, and these are gigantic powerful heroes, and here he is, this tiny guy. They really leaned into that in the writing, which was great, but then they also turned around and he was maybe the only, not the only but maybe the predominant hero in the Avengers that had a girlfriend, the Wasp. That whole Janet van Dyne/Hank Pym relationship in the comics—it was great to see them fighting as a superhero team, but also the romantic component of that was always great.

What do you think will appeal to people about Ant-Man in 2015?

He’s a really relatable guy. Obviously at the beginning of the movie we see him come out of prison. But his main goal in the movie is to be a better father to his daughter, to earn his way into her life. And that immediately felt like a different dynamic for a Marvel movie. Structurally, you’re just with this guy at the beginning of the movie. Obviously it’s not as easy as he thought in the real world, temptation calls and he succumbs to that temptation—he does this heist and finds himself in possession of this suit. I loved the idea that he was a pretty normal guy who gets sucked into this Marvel world. Also, these movies have gotten bigger and bigger and louder and louder, and this movie was a chance to do the inverse—we went smaller. The great joys of the third-act battle in this movie between Yellowjacket and Ant-Man taking place in a little girl’s bedroom—that, to me, was fun.

How did you approach striking that balance between comedy and high-stakes action in those fight scenes?

It was something that was inherent in the movie from the beginning. There’s an absurdity to Ant-Man’s powers. He shrinks and controls ants, and you have to acknowledge that, but you also have to invest in it. I think that’s where Paul Rudd shines, because you absolutely buy Paul as a hero in the movie but he responds to these absurdities in the same way that you or I would. Paul Rudd is gonna hold your hand through this very strange adventure. I don’t think anyone’s gonna go see Ant-Man thinking that there’s gonna be anything emotional about it, but we really wanted there to be emotional stuff. But also we had a phrase, “treacle cutters.” If there was a very emotional part of the movie, we wanted to puncture it with a joke, and find that balance throughout.

What influences did you have in mind as you started work on the movie?

There’s 50 years of Ant-Man comics, so I would go through and look at different imagery from those comics, and there were elements, visually, that I wanted to bring to the movie. And then it has the structure of a heist movie, so there were rhythms that I wanted the movie to have. I wanted it to start with a little bit of a slow burn, and then once it catches fire, to just take off and move as a heist movie should. And then we added all these elements with Michael Peña and these tips that he provides to Scott Lang—that was something that we added when we were shooting the movie because Peña is just so amazingly funny and I wanted to bolster the visual language of the heist movie even more.

How did you approach shooting in 3D differently? How does it affect the sequences of action, and also dialogue-heavy scenes?

I’m a very compositional director. How things are blocked, how things move and the frames are always important to me. I’ve done predominantly comedies, but I never wanted to be a comedy director that just set the camera there and recorded someone being funny. I want the camera to be very much a part of the action and the comedy of a movie. So it was no different on this movie—it was just finding really striking compositions. I’ve traditionally not been a huge 3D fan. I’ve seen all the 3D movies, but this movie really felt like it organically lent itself to 3D, just because we’re dealing with issues of scale and perspective, and shallow depth of field—things like that. I love the movie in 3D. Honestly, I wasn’t sure I was gonna say that. I really wanted it to be a strong 3D movie, but I was really pleased to see the final results.

What were you trying to accomplish with the character of Hope?

Hope was always in the early drafts of the movie, but Evangeline [Lilly] and I had a lot of conversations early on about her arc in the movie—strengthening and deepening that arc, creating a character who had real issues at the beginning of the movie, particularly with her father, and kind of exploring the origin of those issues. As I said, in the comics, the relationship between Janet van Dyne and Hank Pym was so crucial, and Janet really was not in those early drafts, and I really wanted her somehow to be a presence in the movie. I like how we solved it because it’s really organic to the story between Hank and Hope. Ant-Man is as much Hope’s story as it is Scott’s. I like the idea that Hank Pym has this problem: he needs to get his technology back and destroy that other suit, and he recruits Scott Lang, when in fact the solution to his problem has been under his nose the whole time. Hope is clearly the more qualified person to deal with this issue, but Hank can’t see it. And part of his journey in the movie is becoming enlightened enough to know that he thinks he’s been protecting his daughter, but what he’s really been doing is holding her back and not acknowledging what she can bring to bear on the situation. So in the end when we see her get that suit, it’s been a very satisfying thing for audiences. I, for one, hope that we get the opportunity to really see what that character can do.

What are your thoughts on the current state of women in comic book movies?

It’s always been important to me in my movies—Bring It On, particularly, Down With Love and even The Breakup—to create really real female characters. It just seems like something that used to be a fundamental part of movies in the ‘30s and ‘40s, and then just sort of disappeared. Particularly in this genre of movie, the so-called blockbuster, these visual effects spectacles, there’s weirdly still a reluctance to have a female character at the center of these movies. James Cameron has done this for years: Sigourney Weaver in Aliens, if you look at Terminator, Linda Hamilton’s at the center of those movies, and Titanic and Avatar—every one of his movies, which are the biggest movies in the history of movies, and the lesson still hasn’t been learned.

What were the challenges of making the movie the way you wanted while still fitting into the Marvel universe?

I actually didn’t find it that challenging. When I first came in, one of the things I said is, “Ant-Man has to stand alone as its own movie.” It’s an origin movie, and it has to work as a beginning, middle and end if you’ve never seen another Marvel movie. If you have seen another Marvel movie, there’s absolutely stuff in the movie that enhances the experience. More than anything else, the one thing I kept getting from Marvel was, “Make it different, man.” Bring some imagery and ideas and things to the movie and make it as idiosyncratic as you can. Which, to me, was really liberating, because this is their twelfth movie. And I think Marvel’s biggest fear is to repeat themselves. I think it’s smart how they’ve taken different genres: Guardians [of the Galaxy] is a space opera; Winter Soldier is a ‘70s political thriller; our movie is essentially a heist movie. They really do, not only allow for, but encourage each movie to have its own eccentric tone.

What’s next for you and Ant-Man?

What is next for me is a little bit of a vacation with my wife and my seven-week-old child. After that remains to be seen. There’s definitely a lot more story to tell with these characters, and I’m hoping that we get to do that, because if we do, I would absolutely be on board for that. 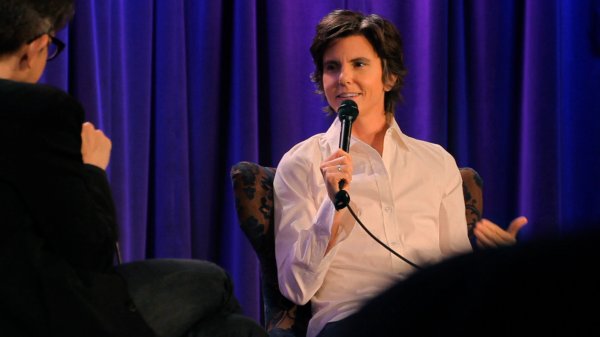 Watch Tig Notaro Talk About Going Viral in a New Clip From Her Netflix Documentary
Next Up: Editor's Pick