Business mogul Donald Trump claimed a personal net worth of over $10 billion after filing a personal financial disclosure form with the Federal Election Commission, a key procedural hurdle for his presidential campaign.

The filing clears the way for Trump to appear on the first GOP debate stage on Aug. 6 in Cleveland, and comes as he has risen to the top of polls of Republican voters. Trump reported earning more than $362 million in 2014, according to his campaign — dwarfing the rest of the GOP field’s net worth by a significant margin.

In typical Trump fashion, the campaign released a statement full of braggadocio to commemorate the occasion.

“This report was not designed for a man of Mr. Trump’s massive wealth,” his campaign said “For instance, they have boxes once a certain number is reached that simply state $50 million or more. Many of these boxes have been checked. As an example, if a building owned by Mr. Trump is worth $1.5 billion, the box checked is “$50,000,000 or more.”

The filing reportedly shows that Trump is affiliated with nearly “500 business entities of which 91% are owned 100% by him.” According to his campaign, he earned $213,606,575 during the 14 seasons of The Apprentice, the NBC reality show which was renewed in May without Trump’s participation.

Last month, Trump filed a preliminary financial statement claiming a net worth of about $8.7 billion.

“Mr. Trump’s net worth has increased since the more than one year old financial statement produced at his presidential announcement,” his campaign said. “Real estate values in New York City, San Francisco, Miami and many other places where he owns property have gone up considerably during this period of time. His debt is a very small percentage of value, and at very low interest rates. As of this date, Mr. Trump’s net worth is in excess of TEN BILLION DOLLARS.” (Emphasis theirs.)

In a statement, Trump needled those who said he would never file the official forms, which must be certified by the candidate as “true, complete and correct to the best of [their] knowledge.”

“First people said I would never run, and I did,” Trump said. “Then, they said, I would never file my statement of candidacy with the FEC, and I did. Next, they said I would never file my personal financial disclosure forms. I filed them early despite the fact that I am allowed two 45 days extensions. Now I have surged in the polls and am fighting to Make America Great Again. I look forward to the challenge of winning the presidency and doing a fantastic job for our country. I will make the United States rich and strong and respected again, but also a country with a ‘big heart’ toward the care of our people.”

Read Next: Trump Talks Politics at His Virginia Winery 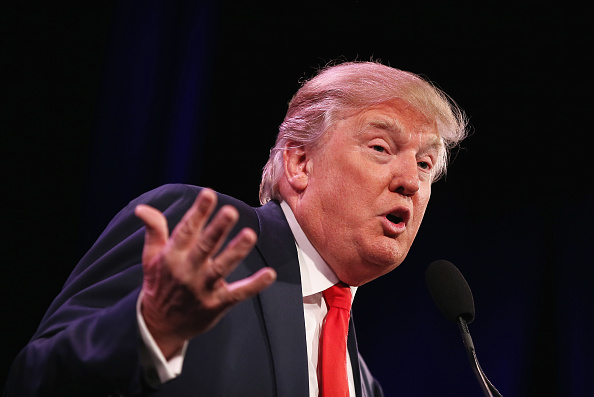 Trump Talks Politics at His Virginia Winery
Next Up: Editor's Pick