The Iranian military are not renowned for their love of rap, rhythm and blues music and social media but Iranian generals decided they needed a novel response to this week’s nuclear deal with the U.S. and other world powers.

They helped a controversial Iranian singer, Amir Tataloo, produce a video with the Iranian army and navy, which endorses the deal but upholds Iran’s right to self defense and to patrol the Persian Gulf.

Tataloo, whose real name is Amir Hossein Maghsoodloo, is one of Iran’s most famous rappers with a 1.4 million following on Instagram and 1.2 million on Facebook but none of his songs can be broadcast on Iranian TV channels or radio stations because he is not approved by the Minister of Culture and Islamic Guidance. He has been critical of the government for banning his albums, which they deem as Western, non-Iranian and immoral. In 2013, Tatalou was arrested by Iran’s morality police and later released.

This did not disturb the Iranian military who gave Tataloo unprecdented access for the video for the song Energy Hasteei or Nuclear Energy.

The clip, which has English subtitles and features signs in English, begins with a stark message: “No power can deny peaceful nuclear energy from the Iranian nation” and goes on to show Tataloo singing with a squad of Iranian marines marching behind him. “I’m an honest Iranian/ Against all violence/ But if it’s gonna be by force/ Then I stay in this path with all my being/ A firearm can either kill you or make your homeland safer,” he sings.

When the chorus kicks in, Tataloo is standing defiantly on the deck of the warship Damavand. “This is our absolute right/To have an armed Persian Gulf, ” he sings in Farsi.

Amir Hossein Rasael, the deputy editor of the Iranian monthly Shabake Aftab said he was surprised to see Tataloo on board a naval ship because his music was previously considered by the government “to be part of satanic cults.”

Part of the impetus could be the realisation that the only way for the military to get its message to an increasingly modern Iranian youth is to use social media and popular culture. “State institutions such as the military have realized that a part of the Iranian society, especially the youth are not hearing their voice. They are not getting their message on why some things have to be done. The fastest way to get that message across was to allow a rapper with so many fans to sing about it. They were successful, amazingly so, I’ve seen teenagers who don’t know what the Vienna deal was about, watching Tataloo’s clip on their smartphones,” says Rasael. 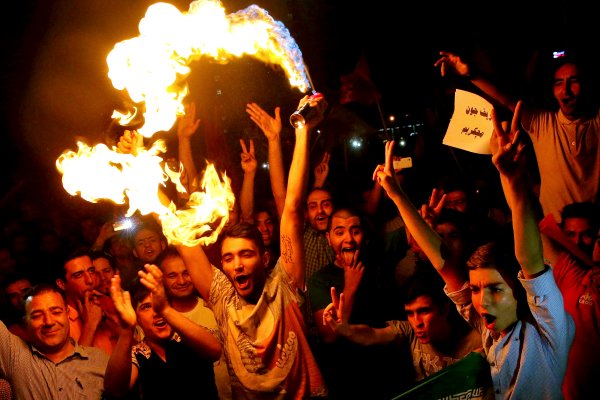