In this file photo from 2002, Dup Muller, 59, a commercial farmer in Headlands, 110 kilometers, (70 miles) East of Harare, stands in the burned out ruins of his farm house, which was attacked by war veterans enforcing a government order for whites to leave their farms.
AARON UFUMELI—AFP/Getty Images
By Nash Jenkins

A decade and a half after the Zimbabwean government seized large swaths of land from white farmers in the country, President Robert Mugabe has tentatively declared that he will return certain properties to their original owners.

Under the suggested policy, the leaders of the country’s 10 provinces will draft a list of farms in their respective districts that they deem to be “of strategic economic importance,” the Zimbabwe Mail reports. The government will also establish a European Union–backed commission to evaluate the landgrab practices commenced in 2000, which were frequently violent.

The property-seizure policy, which sent the country into economic crisis and left a number of civilian landowners dead, was both an exercise in kleptocracy and an attempt to wrest the country from its fraught colonial legacy. Many of the 4,000 white-owned farms taken by Mugabe’s government had been operated by the same families for decades — families that had come to the British colony of Rhodesia to make their fortunes in a system built on racial hierarchy.

At present, only 300 white farmers remain on their original properties; meanwhile, a number of the farms seized in the past 15 years have ceased operations, requiring Zimbabwe — the erstwhile “Breadbasket of Africa” — to import food to stave off a hunger crisis.

In spite of his government’s failure to sustain agricultural success on the reclaimed lands, Mugabe obstinately continues to defend his original decision.

“Don’t be too kind to white farmers,” Mugabe said at a recent meeting of the Zimbabwe African National Union–Patriotic Front, the country’s ruling nationalist party, the Mail reports. “They can own industries and companies or stay in apartments in our towns, but they cannot own land. They must leave the land to blacks.” 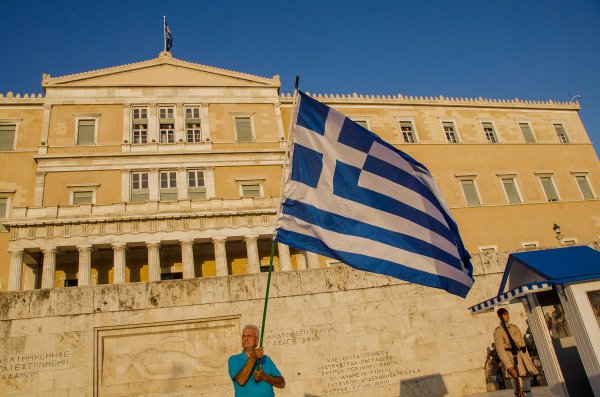 Greeks Prepare for Bailout Battle at Home
Next Up: Editor's Pick