Your Phone Knows If You're Depressed

Most of us are pretty attached to our phones, and researchers are starting to figure out what that connection can tell us about our health, including our mood. In fact, your phone may be able to tell if you’re depressed even better than a self-assessment of your own depression can, according to a small new study published in the Journal of Medical Internet Research.

“We found that the more time people spend on their phones, the more likely they are to be more depressed,” says David Mohr, one of the authors of the study and director of the Center for Behavioral Intervention Technologies at Northwestern University Feinberg School of Medicine. The researchers also found that spending lots of time at home was linked to depression—and that phone data like this could predict with 87% accuracy whether someone had symptoms of depression.

Northwestern researchers recruited 28 people ages 19-58 from Craigslist and souped up their smartphones with location-and-usage monitoring software. At the start of the study, they took a standardized questionnaire that measures depressive symptoms; half of the subjects had symptoms of depression, and half did not. For two weeks, the phones tracked GPS location information every five minutes and pinged the users with questions about their mood several times a day.

The phone data the researchers collected were rich: how many places the participants visited each day, how much time they spent in each of those places and how frequently they used their phones, says Sohrob Saeb, one of the study’s authors and a postdoctoral fellow and computer scientist in preventive medicine at Feinberg. The researchers then correlated this objective data with their depression test scores.

What they hoped to find was a connection between the objective markers of behavior—such as where the people were and how often they changed locations—and their depression test results. That way, the data derived from phones could become a useful way to track depression without the user having to report how they were feeling, which is often a barrier to depression treatment, says Mohr, who has studied depression for about 20 years. “One of the things that we find over and over again is that people don’t answer questions,” he says. “In apps, they’ll respond to questions for a few days and then get tired of it.”

Mohr and his team indeed found a strong correlation between these objective markers and depression. Phone data were even better than the daily questions the users answered to predict depression test results. “People who tend to spend more time in just one or two places—like people who stay at home or go to work and go back home—are more likely to have higher depression scores,” says Mohr. When a person moved around was important, too; people who stuck to a regular pattern of movement tended to be less depressed, they found. “This fits into a larger body of clinical research showing that people with mental health problems in general, their circadian rhythms get thrown off,” Mohr says. “Usually it’s looked at with sleep and activity, but here we’re seeing it also in terms of their movement through geographic space.” When people get depressed, he says, their mood may pull them off their routine.

Depressed people, too, spent an average of 68 minutes using their phones each day, while people without depression only spent about 17 minutes on their phones. The software didn’t track what people did on their phones—just whether or not they were using it. But the authors have some ideas about why they saw phone activity rise with depression. “One of the things we see when people are depressed is that people tend to start avoiding tasks or things they have to do, particularly when they’re uncomfortable,” Mohr explains. “Using the phone, going in and using an app, is kind of a distraction.”

It’s preliminary research, but Mohr hopes to add to the number of smartphone sensors and use these to subtly help manage depression and spot it more quickly, without requiring any work on behalf of the user. “Being able to get people timely treatment for depression is a critical failure point in public health right now,” Mohr says. An app that people download on their phones—without having to answer any questions—may help pinpoint their depressive states more effectively and help them get treatment. 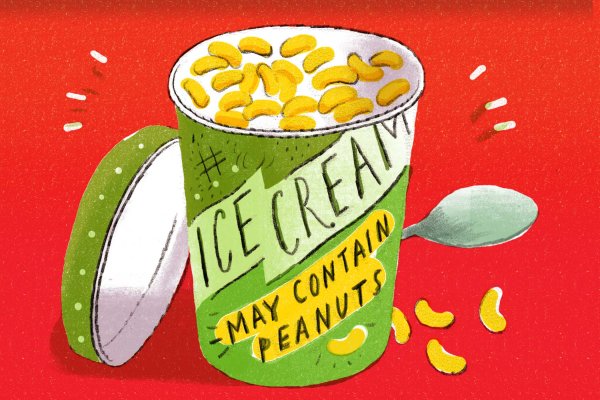 You Asked: Can I Trust Allergy Warnings On Food Labels?
Next Up: Editor's Pick