The New Horizons spacecraft’s close encounter with Pluto has already yielded some pretty remarkable new info on the dwarf planet, including its actual size and what its surface looks like.

And on Tuesday, members of NASA’s New Horizons Science Team took to Reddit to answer questions about the mission in an “Ask Me Anything” thread. Here are three things we learned from the Q&A:

There might be snow on Pluto! But leave the skis at home

Team leader Alan Stern suggested earlier Tuesday that the dwarf-planet showed signs of snow. But Kelsi Singer, a post-doc on the New Horizons Science Team, gave Redditors the real scoop: “If there was snow, it would be quite frictiony, like skiing on sand, because it is sooooo cold there,” Singer wrote. “It would not be like the snow on Earth, which is actually quite balmy compared to Pluto.” Singer’s post had some Redditors reimagining their ski vacations.

Pluto has a more youthful complexion than its moon Charon

Images sent back to earth on Tuesday of Pluto’s Texas-sized moon, Charon, revealed a “system of chasms” that NASA claimed is “larger than the grand canyon.” Pluto’s geological features, meanwhile, appear to be much newer. Why the starkly different surfaces?

Stuart Robbins, a research scientist with the NASA team, replied that the two most likely reasons had to do with Pluto’s size and atmosphere. “Pluto is larger than Charon,” Robbins wrote, “so it can retain more heat and have active geology longer.” The other? “Pluto has a tenuous atmosphere, and during the 248-year orbit around the sun, the atmosphere sublimates from one area in sun and is deposited in another in darkness, and then this reverses half-way through the orbit,” Robbins explained. “This process is very slow, relatively speaking, but so is cratering.”

It takes about 4.5 hours for light to travel from Pluto back to the Earth, and according to Robbins, that means a lag in getting data back from the space probe. “It takes over an hour for an image to be played back because of the very slow speeds over such a long distance,” Robbins wrote. But that’s nothing compared to total download time for all the data collected during the close encounter—Robbins said it should all be downloaded in about 16 months.

Read next: 9 Facts About Pluto You Need to Know 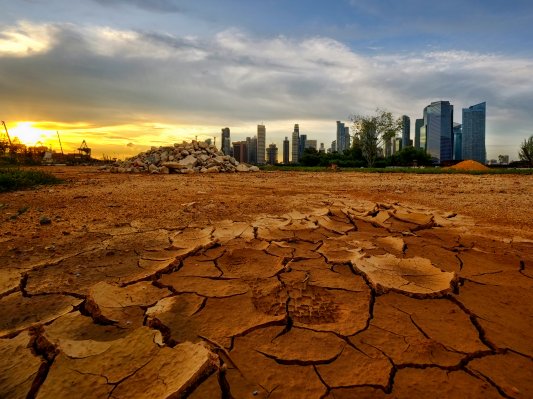 Here Are the Countries Where People Are Most Concerned About Climate Change
Next Up: Editor's Pick