Iranian Nuclear Deal Is a Win for Anti-Semitism

I suppose all hatred has an element of irrationality. Yet some hatreds are more irrational than others. For thousands of years, hatred of Jews has been unique.

Sometimes acts of hatred, such as confiscating Jewish wealth or property, served utilitarian purposes for rulers or mobs. But often nations deliberately wounded themselves and their prospects by expelling Jews, persecuting them, and killing them.

I write these words in the eternal city of Rome, where Jews were confined to a ghetto, a tiny space where the Tiber river often flooded, forcing them to periodically escape by boat until they could return to their moldering, crowded homes. As the population grew, they had to build up because they were not allowed a square inch more space. Jews were permitted to have one synagogue, and it, too, had to be subdivided to accommodate different customs. It was less than 150 years ago that Jews were finally permitted to live elsewhere in Rome.

If you think this has nothing to do with the Iran nuclear deal, then you are in good company. Here is President Barack Obama, speaking to Jeffrey Goldberg of the Atlantic magazine:

I dearly wish it were so. Having never lived in Iran, I still offer my own life as counter-evidence. Fully half of the membership of my congregation in Los Angeles are Persian Jews. The vast majority came to the U.S. after 1979, when Shah Mohammad Reza Pahlavi fell and Grand Ayatollah Ruhollah Khomeini took over. They left not only because of the summary execution of a respected philanthropist and leader of the community, but because it was increasingly clear that confiscation and brutality were replacing the shah’s regime of tolerance. As a result, many of the best and brightest of Iranian society—doctors, business leaders, even government officials, left or were hounded out. Listening to their stories, it’s clear the degree of self-inflicted damage the Iranian regime did is astonishing.

It would be a better world if anti-Semitic regimes put aside their hatreds to pursue their vital interests, but history militates against that illusion. You don’t need to invoke the famous and egregious example of Nazis diverting precious resources, trucks, and other war materials, in order to keep transporting Jews to the concentration camps. You don’t have to recall how some Nazis busily executed Jews even as they ran from the conquering allied troops. You can invoke Vichy, France, turning over the Jews who were its best and brightest, or the Soviet Union, which lost so much cultural and business acumen and capital through years of suppression. Anti-Semites cannot help themselves. To them, the injury is worthwhile if they can savage the Jews.

So without exploring the specifics of the deal, which are troubling, there is a ground-level assumption that Iran’s leaders share our fundamental interests in “having some semblance of legitimacy.” Granting that Iran is a sophisticated country, it’s also true that hatred of Israel and particularly, hatred of Jews, has proved a remarkably durable governing strategy in the modern world. How far will Iranians go, once some money is in hand, to pursue their destructive agenda? The belief that rational self-interest is a governing principle is a belief common to rational people.

In a world where countries are run by anti-Semites, being anti-Semitic is not necessarily more dangerous than misunderstanding anti-Semitism. We have just concluded a deal with people infected with the oldest and most virulent pathology of hatred the world has known. This is no time for celebration. 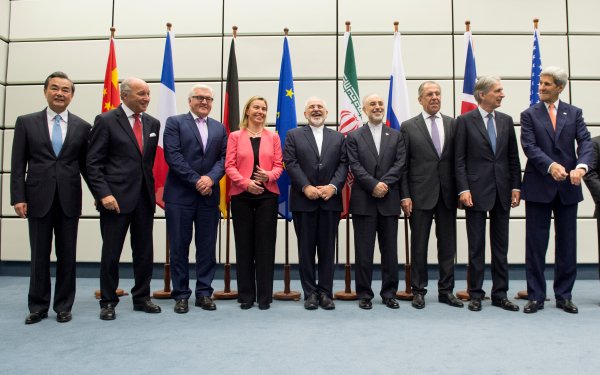 What the Iran Nuclear Deal Means—and What It Doesn't
Next Up: Editor's Pick