For Donald Trump, business is politics.

Standing on the porch of Albemarle Estates surrounded by more than 1,000 acres of greenery and vineyards at his newly renovated luxury bed and breakfast in a neo-Georgian mansion, the reality television star and GOP presidential candidate discussed how he came to own the property.

“They were going to sell this house for a fortune, at one point it was close to $100 [million], and then it was $48 million,” Trump recounted, sweating in a navy suit beneath the glaring sun. “I bought all the roads, I bought all the land. People would come, but say, how can I have a house like this and I can’t get to it—little problem.”

He ultimately bought it for $6.5 million.

“That’s the kind of thinking you need when you’re dealing with the Chinese,” he says. “We should be making deals just like this … phenomenal deals, where people say how do they do that?”

“Sometimes it helps to have a terrible reputation,” he quipped to an assembled crowd of well-heeled notables and patrons. “We use people who are incompetent,” he added, of American negotiators abroad.

It was just the latest stop on Trump’s presidential campaign and business tour, which are often indistinguishable, and it came on the same day that Trump topped a Suffolk University/USA Today national poll of Republican voters, with 17 percent support.

Trump flew to a nearby airport aboard his private Boeing 757, arriving at the property aboard a helicopter emblazoned with the TRUMP logo.

It’s his career as a negotiator, he argues, that will make voters overlook this largess. On Wednesday or Thursday, he promises, he will release his personal financial disclosure with the Federal Election Commission.

Striking a populist tone, Trump broke publicly with the Republican Party, who he says is too focused on taking care of the wealthy.

Asked how he would help the poor, Trump said he would work to repeal the Affordable Care Act, declining to discuss other specifics.

“I’m not going to talk to you about it now,” he said in response to a question from TIME. “I’m going to release a plan.”

Indeed, Trump has long been out-of-step with conservative orthodoxy on the subject, having endorsed a single-payer health-care system 15 years ago as well as a one-time wealth tax to pay down the national debt.

In Phoenix on Saturday, Trump proclaimed that he was hoping to marshal a “silent majority” of voters who are dissatisfied with the American political system. And while he has risen to the top in national and statewide polls of Republicans, Trump faces skepticism.

Asked about polling that shows that many Republicans believe he is simply running in order to boost his business interests, Trump spun it as a positive, suggesting that there are even more Americans who agree with him, but need to be convinced he is serious.

“I hope that’s right that 40 percent think I’m doing it [for publicity], because a lot of those people are voters for Trump, but they won’t be in the polls if they think I’m doing this for publicity,” he said. “Why would I be doing this? … This isn’t fun, I want to make American great again.”

Trump told reporters Tuesday that he rejects Democratic frontrunner Hillary Clinton’s criticism of his tone, for instance when he suggested that many people in the U.S. illegally are “rapists.” He added that for every Republican that has criticized his hardline stance against illegal immigration, more have come around to his side.

In a statement Tuesday, Trump called Clinton a “desperate” and “sad” candidate, asserting that she is going after him because he is now “her real competition.”

Trump, who claims to have fielded threats from escaped Mexican drug cartel leader Joaquin “El Chapo” Guzman, said he is working with law enforcement on his security.

“We have officials all over the place, including right outside hanging out in trees,” he told reporters. 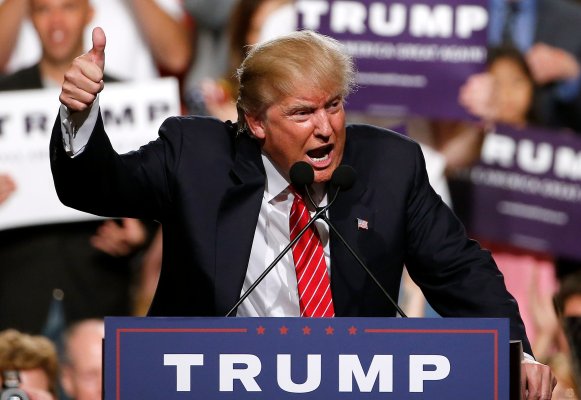 Donald Trump Trolls Critics on Instagram
Next Up: Editor's Pick