This graphic presents a view of Pluto and Charon as they would appear if placed slightly above Earth's surface and viewed from a great distance.
By Jacob Koffler

Humankind got closer to Pluto than ever before on Tuesday morning, with NASA’s New Horizons probe flying just 6,000 miles from the former planet.

The unprecedented proximity to Pluto has provided scientists with previously unconfirmed data about the dwarf planet, including its size. On Monday, NASA announced that Pluto, with a diameter of 1,473 miles, is slightly larger than previously thought. To help space enthusiasts conceptualize Pluto’s size, NASA created a graphic comparing Earth, Pluto and Charon, Pluto’s largest moon.

For more Pluto coverage, check out 9 Facts About Pluto You Need to Know. 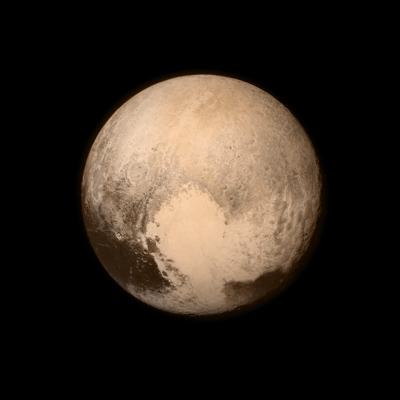 9 Facts About Pluto You Need to Know
Next Up: Editor's Pick