What to Know About the Iran Nuclear Deal

The U.S. and other world powers announced a deal with Iran early Tuesday to curb its nuclear program in exchange for giving the country relief from economic sanctions. Here’s what you need to know.

How did this deal come about?

Shortly after President Obama took office, the United States joined with other major powers, including China and Russia, to put crippling economic sanctions on Iran to pressure the country to abandon its nuclear program. Over the last two years, Iran and the U.S. have been negotiating to remove those sanctions in exchange for a dismantling of the nuclear program and an ongoing regime of inspections.

So what’s in the deal?

The basic trade is this: Iran will get relief from sanctions, including access to international oil markets, which will bring it a windfall of about $100 billion. In exchange, Iran must dispose of most of its low-enriched uranium, stop efforts to produce or acquire more nuclear fuel, and consent to an inspections regime meant to ensure that the country does not cheat in its promise not to pursue a nuclear weapon over the next decade. The inspections will be overseen by the International Atomic Energy Agency, an intergovernmental group headquartered in Austria. “Because of this deal, we will, for the first time, be in a position to verify all of these commitments,” Obama said Tuesday morning. “That means this deal is not built on trust; it is built on verification. Inspectors will have 24/7 access to Iran’s key nuclear facilities.”

How is the world reacting to the deal?

The world’s major nuclear powers appear to be on board, and the United Nations Security Council is expected to take action in the coming weeks to remove sanctions. Iran’s regional neighbors, however, are less pleased. Saudi Arabia, a Sunni Muslim nation, is wary that the deal will allow Shiite Iran to grow as a regional and world power. Similarly, Israel, a longtime military foe of Iran, opposes the deal. Israeli Prime Minister Benjamin Netanyahu called the deal a “historic mistake for the world.” He continued, “Iran will receive hundreds of billions of dollars with which it can fuel its terror machine and its expansion and aggression throughout the Middle East and across the globe.”

How are American political leaders reacting to the deal?

Republican presidential candidates are uniformly against the deal, and have promised to make it a central part of the coming campaign. Wisconsin Gov. Scott Walker called it “one of America’s worst diplomatic failures.” South Carolina Sen. Lindsay Graham described it as “far worse than I ever dreamed it could be.” Republicans in the Senate will seek Democratic allies in the coming month in an effort to vote to block the deal.

Former Secretary of State Hillary Clinton, the Democratic front-runner, is supporting the deal.

Obama has promised to veto any congressional effort to change the agreement, and there is little chance that Republicans will get the two-thirds majority needed to override that veto. 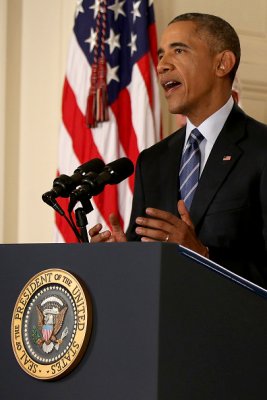