When Culture Club frontman Boy George stopped by Conan last night, Conan O’Brien dutifully asked him about his musical influences. Boy George explained that he had never gotten past his love of ’70s musical acts like the Rolling Stones and The Doors. At the mention of The Doors, Jack Black, who was on the show to promote his HBO series The Brink, couldn’t help but pipe up that the band’s singer, Jim Morrison, had the best “Yo!” in the history of rock. With two Doors-loving musicians on his hands, O’Brien suggested they perform together.

While the Conan house band claimed to not know any of the band’s hits, The Doors guitarist Robby Krieger just so happened to be on hand to sit in with the band on a rendition of “Hello, I Love You” with Black and Boy George trading off vocals. It was a fun fake-spontaneous performance between two stars with a surprising amount of chemistry. The only unfortunate part of their performance is that you may end up with The Doors stuck in your head for the rest of the day. 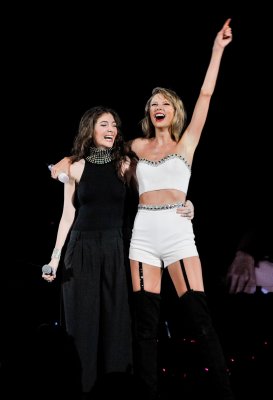 Watch Lorde Perform 'Royals' On Stage With Taylor Swift
Next Up: Editor's Pick