In 2006, Pluto was demoted from planet to “dwarf planet” status, a controversial decision that seemed to promise to sink the tiny celestial body into irrelevance. But Tuesday morning, a close-up photo of Pluto debuted on NASA’s Instagram account, elevating the underdog to perhaps one of the hippest chunks of rock and ice in the solar system.

NASA’s New Horizons spacecraft, which launched just months before Pluto’s demotion in 2006, has been hurtling toward the dwarf planet and its moons and sending photos back to Earth. The picture posted on Instagram Tuesday morning is the most detailed photo of Pluto’s surface that NASA has ever taken. The spacecraft captured the photo on Monday afternoon, “about 16 hours before the moment of closest approach,” NASA wrote in the Instagram caption.

SNEAK PEEK of gorgeous Pluto! The dwarf planet has sent a love note back to Earth via our New Horizons spacecraft, which has traveled more than 9 years and 3+ billion miles. This is the last and most detailed image of Pluto sent to Earth before the moment of closest approach – 7:49 a.m. EDT today. This same image will be released and discussed at 8 a.m. EDT today. Watch our briefing live on NASA Television at: http://www.nasa.gov/nasatv The high res pic will be posted on the web at: http://www.nasa.gov. This stunning image of the dwarf planet was captured from New Horizons at about 4 p.m. EDT on July 13, about 16 hours before the moment of closest approach. The spacecraft was 476,000 miles (766,000 kilometers) from the surface. Image Credit: NASA #nasa #pluto #plutoflyby #newhorizons #solarsystem #nasabeyond #science

NASA debuted the historic picture on Instagram an hour before releasing it on the agency’s own site. NASA social media manager John Yembrick told Wired that they “made an editorial decision to give the world a sneak peek of the image on Instagram” to engage new audiences. The account’s followers responded positively, lavishing more than 142,000 likes on the photo in its first three hours.

The spacecraft will take even closer photos of the dwarf planet’s surface Tuesday morning, and NASA will release those photos Wednesday. Not a bad turn-around for a photo taken more than 3 billion miles away. 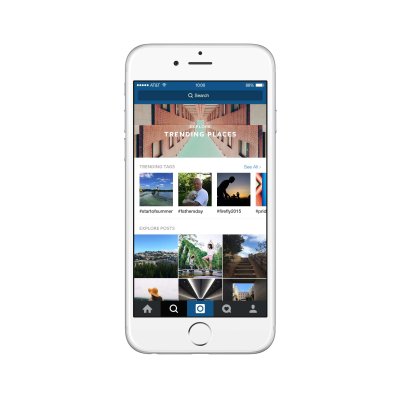 Instagram's New Search Update Makes it Easier to Explore the World
Next Up: Editor's Pick