In its efforts to colonize the multiplex with heroes, Marvel Studios has gone big (Thor), bigger (Hulk), neurotic (Spider-Man), unmanicured (Wolverine) and anarchist collective (Avengers) and finally decided that less is more. Turns out they were right: Ant-Man, while based on a minor deity in Marvel’s pantheon, is not only one of the more entertainingly human fantasies to come out of the studio, but it also defies the bedrock fanboy aesthetic that you don’t want to merely watch the superhero; you want to be the superhero. Who wants to be a tiny little man, running through carpet nap like it was a cornfield in North by Northwest?

For any of Ant-Man’s deficiencies in the vicarious-thrills department, his movie is balanced by multilayered performances as well as a reliance on formula—not the kind that helps our hero, ex-con cat burglar Scott Lang (Paul Rudd), shrink to insect size, but the kind that gets a movie over on an audience. At no time during director Peyton Reed’s concoction does a viewer feel he’s not being played by a movie that’s equal parts revenge tale, redemptive parable, apocalyptic thriller and cornucopia of oedipal clichés. Still, the pace of the wisecracks, pathos, CGI fireworks and scientific double-talk is highly satisfying, even comfortable. Likewise the actors selling it.

Rudd has always been a curious quantity, a team player to the point of bench sitting. Likable, popular, he’s never gotten the star bump from an Apatow comedy of the kind enjoyed by Steve Carell or Seth Rogen. And in Ant-Man once again he’s less than the centerpiece, being elbowed aside by the scenery-devouring Michael Douglas. As Hank Pym, the original Ant-Man, Douglas maneuvers Lang into thwarting the plans of Pym’s former protégé Darren Cross (Corey Stoll), an incipient madman who plans to sell Pym’s ideas to the military—or whatever nefarious interest will pay the most. Rudd brings the warmth, though, which has never been a Marvel priority.

When we first see Lang emerge from prison, he presumes that his master’s degree in electrical engineering will lead to postincarceration employment. Cut to Baskin-Robbins, where he’s relegated to serving numbskulls and working for worse. Desperate to pay his past-due child support so he can see his daughter, he signs on with a trio of larcenous goofballs who have a tip: inside some rich guy’s house in San Francisco is a safe containing untold fortune. What they find isn’t money or jewels. It’s a hybrid motorcycle suit and snorkel mask—the Ant-Man suit. The rich guy is Pym.

The origin story is always the easiest to pull off—the introduction of characters, the training montages. Ant-Man does it all, though Lang has his own skill set when the movie starts, which elevates him above Peter Parker–ish naivete. He’s practiced at parkour, knows technology and cracks Pym’s safe with a series of innovations that are downright magical, as is Reed’s direction of same.

There’s also a complication with Pym’s supposedly estranged daughter Hope (Evangeline Lilly), a martial-arts master and tech savant who doesn’t understand why Dad won’t let her put on the Ant-Man suit. Which makes her less intelligent than she seems to be. Fathers worshipping daughters is a big element in Ant-Man, along with sons rejecting fathers: Cross was mentored by Pym and feels abandoned; his inner turmoil is less Oprah than Aeschylus.

The bonding of Lang and Pym, on the other hand, will lead to great things. And sequels. 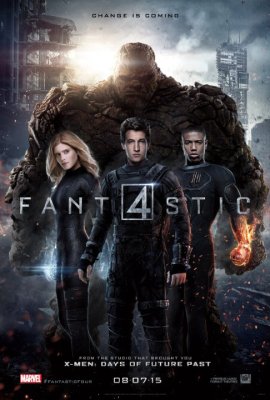 The New Fantastic Four Trailer Takes Us Back to the Beginning
Next Up: Editor's Pick