Western leaders announced Tuesday that a historic deal had been reached with Iran to limit its nuclear capabilities in exchange for the lifting of economic sanctions, after months of prolonged negotiations—a deal hailed by President Obama as an “opportunity to move in a new direction” with a country long at odds with the U.S.

“Today, because America negotiated from a position of strength and principle, we have stopped the spread of nuclear weapons in this region,” Obama said during an early-morning address. “Because of this deal, the international community will be able to verify that the Islamic Republic of Iran will not develop a nuclear weapon.”

Under the deal, Iran would be required to remove two-thirds of its installed centrifuges and 98% of its current uranium stockpile, to bring the “breakout” time Iran would need to make a nuclear weapon to one year, up from the current estimate of just a few months. Iran would be offered some sanctions relief in exchange for compliance with the deal. If Iran doesn’t comply, Obama said, any sanctions relief that’s offered under the deal would be suspended.

Congress now has 60 days to vote the deal up or down, but Obama said he would veto any legislation to block the deal. “This is not the time for politics or posturing,” he said. “Tough talk from Washington does not solve problems. Hard-nosed diplomacy, leadership that has united the world’s major powers offers a more effective way to verify that Iran is not pursuing a nuclear weapon.”

Iranian President Hassan Rouhani also heralded the deal on Tuesday. “Negotiators have reached a good agreement and I announce to our people that our prayers have come true,” Rouhani said during a televised address that aired after Obama spoke.

But opposition to the deal came swiftly from Israel and from Republican leaders and presidential candidates. Israeli Prime Minister Benjamin Netanyahu said the world is a “much more dangerous place” because of the deal, and that his country would not be bound by it, according to the Associated Press. Netanyahu vowed to pursue any diplomatic efforts that would block the deal. Republicans took to the airwaves and to social media to hammer the Obama Administration for cutting a deal, and the accord seemed certain to become a flashpoint in the presidential race. Wisconsin Gov. Scott Walker, a Republican front-runner who announced his presidential campaign on Monday, said the deal “will be remembered as one of America’s worst diplomatic failures.”

Shortly before Obama spoke in Washington, leaders in Vienna and within the countries involved in negotiations hailed the “historic” nature of the deal. In a joint statement on Tuesday, European Union High Representative Federica Mogherini and Iranian Foreign Minister Javad Zarif said the agreement offers “new possibilities.”

“This agreement opens new possibilities and a way forward to end a crisis that has lasted for more than 10 years,” the leaders said. “We are committed to make sure this Joint Comprehensive Plan of Action is fully implemented, counting also on the contribution of the International Atomic Energy Agency.”

In London, the British Defense Minister Philip Hammond also welcomed the deal but recognized the anxiety of some of Iran’s neighbors in the Middle East. “We recognise the concern in the region about Iran’s historic pattern of regional activity. We will maintain our clear position in support of the Gulf states and against Iranian interference in their internal affairs. We hope, and expect, that this agreement will herald a step-change in Iran’s relations with its neighbours and with the international community,” he said. 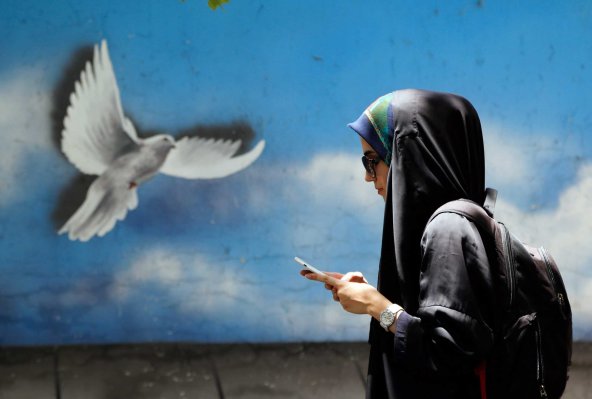 Iranian 'Tinder' Seeks to Encourage Marriage But Not Dating
Next Up: Editor's Pick