Iranians have welcomed the long-anticipated but often-delayed nuclear deal warmly with hopes that it could lead to an end to the country’s international isolation and an improvement in economic fortunes.

Iranians have been told that a nuclear deal would be a sign of national strength and would lead to an increase in Iran’s standing in the world.

Iran’s nuclear program first came into the world’s spotlight 12 years ago and it seemed that a deal between the 5+1 world powers and Iran in Vienna, Austria to prevent Iran building nuclear weapons in return for the lifting of international sanctions, would never be reached.

While details of the deal are not yet clear Iran is already declaring this as a victory for what it calls its policy of resistance and a sign of its rising strength. Veteran Iranian diplomat Sadegh Kharrazi told state TV on Tuesday: “Iran is now at its peak of power in centuries, Iran’s sphere of influence stretches from the Mediterranean to the Indian peninsula, from Kazakhstan to Yemen. This is why the world superpowers have been negotiating with us for so long, that’s why we were able to reach a deal which guarantees our interests.”

Iran’s state TV, which has been hosting a non-stop talk show with the latest updates from Vienna and analysts discussing the latest news for some days, has begun broadcasting patriotic video clips. President Hassan Rouhani is set to make a special speech to the nation on the deal later Tuesday. Plans for nationwide celebrations have been prepared with rallying points set in major cities and the usually strict police force officially stating that they will be standing alongside the public in these celebrations.

People here from all walks of life are overjoyed at the impending end of the sanctions and end to Iran’s pariah status among world nations. “I’m thrilled, I’m very, very happy,” says Mazdak Jafari, an engineer, “with the lifting of sanctions and the coming of foreign companies into Iran there will be major development.”

Others are lauding Iran’s foreign minister Javad Zarif for being able to conclude the talks successfully. “I’m glad that diplomacy at last showed it can work,” says Meisam Allahdad, a steel merchant in Tehran’s bazaar, “everything was solved by talks, without anyone being killed.”

Analysts believe this deal could in time lead to more cooperation between Iran and the United States in the future. “This deal can be the first point of a chain of events that will drastically change the region. It shows that rational Islamic movements such as the Islamic Republic of Iran can coexist with the world, new cases can now be opened between Iran and the United States and Europe where joint action can be taken,” says Amir Mohebbian, a political analyst close to Iranian leaders.

The nuclear talks, while a divisive topic for some time in Iran, have gradually turned into a focal point of unity for the nation that inspires hopes of national power and a better future. “Iran has a great potential, but it has been kept in check by the sanctions. With the lifting of these sanctions this potential will kick into action like a coiled spring,” says Mohebbian. 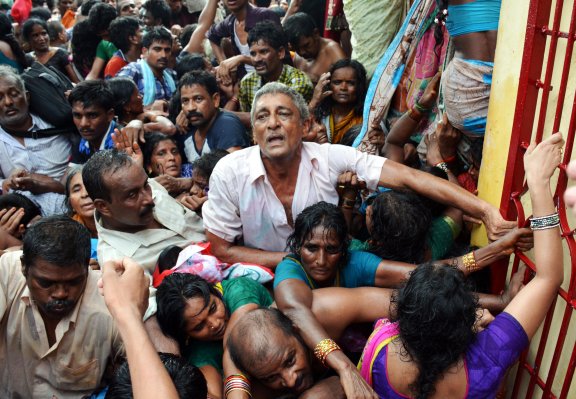 Stampede at Indian Festival Kills At Least 27
Next Up: Editor's Pick