The son of a Boston police captain has been arrested in a counter-terrorism operation by the FBI.

Alexander Ciccolo, 23, bought two pistols and two rifles from an undercover informant, according to ABC News. When agents searched his apartment in Adams, Mass., they found material that could be used to make a bomb, including a pressure cooker and certain chemicals, as well as paperwork planning for an attack.

Ciccolo was described as a recent convert to Islam (he used the name Abu Ali al-Amriki) who was inspired by ISIS as well as the Boston Marathon bombing.

Ciccolo’s father, Captain Robert Ciccolo, was a first responder after the 2013 bomb at the Boston Marathon. He had alerted authorities about a year ago that his estranged son was “spouting extremist jihadist sympathies.” He and his family put out a statement after his son’s arrest, writing, “While we were saddened and disappointed to learn of our son’s intentions, we are grateful that authorities were able to prevent any loss of life or harm to others. At this time, we would ask that the public and the media recognize our grief and respect our desire for privacy.”

Ciccolo was one of more than 10 suspects arrested on July 4 in connection with a possible terrorist attack, officials said, but the news was kept quiet until Monday. He has been detained in a Rhode Island prison since his arrest and is scheduled to appear in court for a detention hearing in Springfield, Mass., on Tuesday. 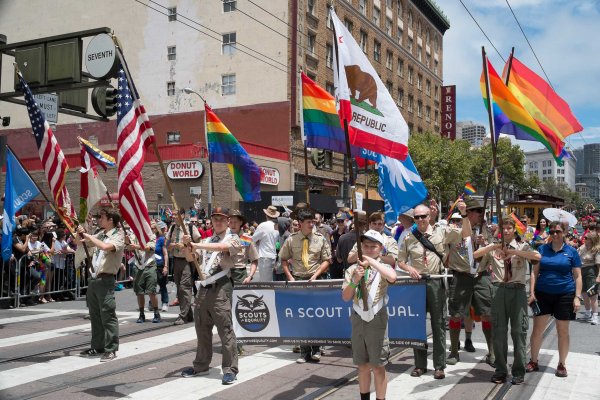 Boy Scouts of America Set to Allow Gay Leaders
Next Up: Editor's Pick