The logo of mobile app "Snapchat" is displayed on a tablet on January 2, 2014 in Paris.
LIONEL BONAVENTURE—AFP/Getty Images
By Tom Huddleston / Fortune

The Wall Street Journal notes that Snapchat tweaked its layout Monday, putting its “Discover” section in a more prominent spot where it can be viewed more easily by the service’s growing user base — Snapchat says it has 100 million daily active users and counting. The Discover section — which features promoted content from media partners such as CNN, ESPN, and Comedy Central — is now displayed at the top of each user’s “Stories” list, whereas users once needed an extra swipe to access the section.

The change prioritizes the Discover section, and its branded content and advertisements, above some content from users’ own personal contacts. WSJ reports the layout redesign comes after Snapchat recently renegotiated its agreements with some of its media partners.

The Discover section launched earlier this year with 11 media partners, who also include Vice, Cosmopolitan and People (which, like Fortune, is owned by Time Inc.). The media platform is part of Snapchat’s plan to turn its popular messaging service into a moneymaker that can justify the company’s recent $16 billion valuation. 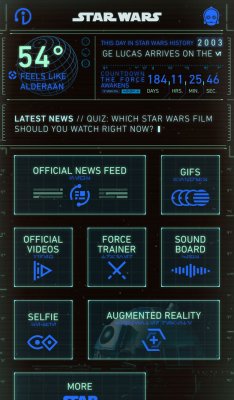 The Official Star Wars App Has Finally Arrived
Next Up: Editor's Pick