An attendee displays the new Apple Inc. iPhone 6, left, and iPhone 6 Plus for a photograph after a product announcement at Flint Center in Cupertino, California, U.S., on Tuesday, Sept. 9, 2014.
Bloomberg—Bloomberg via Getty Images
By Tim Bajarin

Around this time last year, the tech world was buzzing around rumors that Apple’s new iPhone would have a screen made out of sapphire, a material considered tougher than typical glass. Apple invested over $500 million in an Arizona sapphire facility, ostensibly to produce the material for what became the iPhone 6 and iPhone 6 Plus. But shortly thereafter it became clear that facility wouldn’t be able to produce the amount of sapphire Apple would need, and the whole endeavor was scrapped amid a legal battle with the Arizona supplier. Since then, Apple hasn’t shown much interest in using sapphire to cover entire iPhones, opting instead for the latest version of Corning’s Gorilla Glass.

A large company I can’t name recently asked me to re-examine sapphire’s use in mobile devices. From my preliminary research, it looks like glass will continue on as the de-facto standard for smartphones and tablets in the future, while sapphire may be used more often for wearable devices that need more durability — Apple uses sapphire in the two higher-end Apple Watch models, for instance.

That company wanted to know one thing: What do mobile users want in a screen they look at and touch over 100 times a day? To get an answer, I interviewed people who make the screens used in most smartphones, as well as big manufacturers who use the screens in their products. Unsurprisingly, the biggest companies continue to use Gorilla Glass in most of their products. The two global mobile device leaders, Apple and Samsung, use Gorilla Glass because of its improved strength, thinness, durability and cost effectiveness. I expected cost to be a big factor here, as it’s been estimated sapphire screens cost three times what Gorilla Glass does.

Still, Corning is well aware of the threat sapphire might pose. It’s working hard to address durability issues with its latest Gorilla Glass 4 and a new screen material expected to be out this year, currently called Project Phire, which Corning says will boast scratch resistance approaching that of sapphire displays.

Furthermore, in my research I’ve isolated three key questions the mobile industry must answer when thinking about the screens we’ll use on our devices of the future:

Flexibility and adaptability are key. We’re already seeing devices like the Apple Watch shrink to the size of the wrist, signaling the beginning of a new wave of wearables. The materials that cover these devices need to adapt to new shapes and curves. We might even expect screens that flex or even fold. A crystal such as industrially-manufactured sapphire doesn’t bend, so it can’t be shaped or molded to a device design. It also isn’t very flexible, unlike a thin sheet of Gorilla Glass. In talking with some of the big players in mobile, I was surprised at how much they want bendable devices.

Consumers want extraordinary picture clarity and brightness from their screens. But at the same time, they want longer battery life, too. These factors play against one another, as screen brightness is a major drain on battery life. From talking to some big manufacturers, they believe Gorilla Glass provides the clearest display on the market today — and the clearer a device, the less battery it burns up to provide a good brightness level.

Our research showed that consumers also want screens that improve reflectivity and allow for greater clarity in bright sunlight and outdoor environments. Consumers will also want thinner devices, screens that protects against germs and smudging, and even better picture performance.

Could the screens of the future be “taught” to do things? The next generation of displays will require surfaces to do new and different things, like being able to resist glare, dirt and germs. So the material has to be malleable enough that scientists can actually engineer new attributes and characteristics into the surface.

A year after all the hoopla about a sapphire iPhone, it seems that glass remains on track as the dominant screen surface. The makers of glass screens continue to innovate to provide the best possible experiences on our mobile devices. 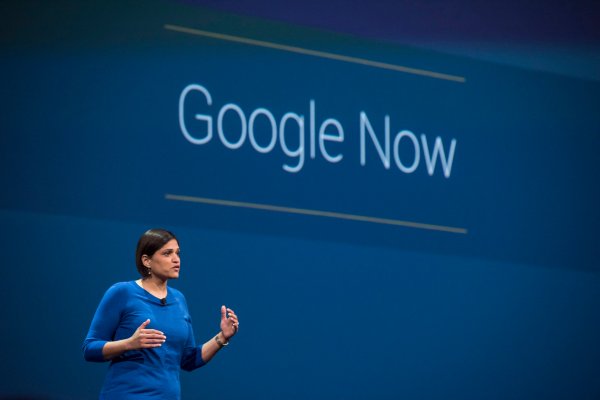 This Is Apple and Google's Next Big Battleground
Next Up: Editor's Pick