At just 55—a year younger than Apple’s Steve Jobs when he passed in 2011—Nintendo CEO and president Satoru Iwata has left us too soon. With his passing, the world of and beyond the games industry has lost a visionary leader and creative giant.

“Mr. Iwata is gone, but it will be years before his impact on both Nintendo and the full video game industry will be fully appreciated,” said Nintendo of America President and COO Reggie Fils-Aimé in a statement Monday morning. “He was a strong leader for our company, and his attributes were clear to most everyone: Intelligence, creativity, curiosity and sense of humor. But for those of us fortunate enough to work closely with him, what will be remembered most were his mentorship and, especially, his friendship. He was a wonderful man. He always challenged us to push forward…to try the new…to upset paradigms—and most of all, to engage, excite and endear our fans. That work will continue uninterrupted.”

I spoke with Mr. Iwata in March for a TIME story about Nintendo’s plans to reinvent itself amid struggling sales, but I had to leave much of the interview out. Here are the rest of Iwata’s answers to my questions, in a dialogue that included his reflections on the evolution of digital content, the importance of multigenerational design and his thoughts on the responsibilities of a company obsessed with surprising (without alienating) consumers.

Note: A few of these answers were previously published in shorter form. I believe the complete versions offer broader insight into Iwata’s philosophies and personal style, and so I’ve included the full versions here.

On his desire to engage with Nintendo fans in unique ways

“I think a typical president of a company does not do things like Iwata Asks or Nintendo Direct, so some people might view me as a slightly strange president. But I do think that there is a tremendous amount of meaning for me to be able to do and continue to do things that only I can do, and so I’ll continue to look for new and unique things that I can contribute.”

On the value of content in a rapidly digitizing world

“We’ve seen dramatic changes to things like music and videos in terms of how they are shared over the last 10 years. And I think certainly we’ve seen it become much more convenient. But as a content industry, I think there are questions as to whether or not they’ve managed to sustain and maintain the value of that content. For example, an artist who once used to be able to sell millions of copies of CDs in the previous model, now they are not selling as many copies of their albums digitally, and the questions is if, as a content creator, they’ve been able to sustain that level of income and revenue in the new model, and I think that there’s questions as to whether or not the content creators have been able to.”

“The digital world is one that has sort of a unique characteristic, where it’s a place in which it’s very easy for the value of content to fall. In the music industry, for the artists who are not able to gather as large of an audience for live performance, they’re finding that they’re not able to achieve as rewarding of an outcome for their content creation. Similarly if you were to speak with movie producers they would have said in the past that DVDs were a very important revenue stream for their business model, but now what we’re seeing is that DVD sales are to achieving sales at the levels they once did and primarily that’s because now there are so many different video streaming services where you’re paying just a few dollars a month and you have access to tens of thousands of different movies that you can stream on demand.”

“And so what we have spent a tremendous amount of time thinking deeply about is, how do we as a content creator who is making games that we are spending tremendous amounts of resources to craft into these experiences that consumers can enjoy and find value in, how can we continue to deliver those experiences to consumers in a way that ensures that we can recoup that investment and achieve an appropriate level of revenue by maintaining the value of the content, while ensuring that the content we’re delivering is of value to the consumer.”

“I guess one thing that I would say is that we have personally experienced of course that even though entertainment is a thing that one can enjoy on their own, it becomes much more fun when you are enjoying it together with others, friends or family. And that it becomes easier for that entertainment to reach a broader audience when it’s designed to do that, and we’ve got a lot of evidence that suggests this. One of the reasons that we put such a focus on things like StreetPass and local play is because we’ve felt that it adds a tremendous amount of value to our entertainment, and we’ve seen this time and again.”

“One thing that we have found over the years is that video games themselves are a thing that have a tendency to be difficult for them to break out of a particular segment, or a particular group, or a particular group of people with particular interests. But what we have found with some of our most successful products, is that they tend to be ones where people are playing them together and the communication is spreading much more broadly and more easily than standard word of mouth communication. And what you start to see is people of different generations playing together and talking with each other, and sometimes you even see grandchildren talking with their grandparents about a video game. And when the game itself is one that reaches across those different age groups, then you see situations where different people are talking about it together and learning from one another different things about the game. And we feel that these types of properties in games that we’ve created have brought many new people into the industry and been a great contribution to the video game industry as a whole.”

On the inception of Super Smash Bros. during Iwata’s tenure at HAL Laboratories, and the original idea for Amiibo

“Of course now Smash Bros. is such an obvious thing to be in existence than most people forget that that type of a debate was something that had to happen when the original game was created. And so the idea at that time was that, we already knew that there were going to be 50 characters playable in the new Smash Bros. game, which is now just released. At the time, the idea was that if we were to create a toy or a figure for each one of those characters, and if you could tap that toy to the system and have that toy interact with not just Smash Bros. but with a lot of different games, you would see very quickly that people would want to collect the toys and they would want to get the benefit of having the toys and using the toys in many different games, and that together all of that would make the overall value of the platform increase greatly for the consumers, and the value of owning the toys and the games would also increase. So that was the original idea around amiibo.”

On the Nintendo Wii and taking risks

“In the time period before Wii was called Wii and we still referred to it as Revolution, no one thought it was going to succeed. But it produced the results that it did, and it was able to do that on the back of Wii Sports, on a single software title, which changed the fate of the system. And so I think the entertainment industry is one where continually we’ve seen how a single product can determine the future of a product or company, and that’s where I think us being able to devote all of our Kyoto craftsmanship to creating our products is where people can look forward to what’s coming from us in the future.”

“Nintendo is a company that’s in a very unique position, in that we are both a platform holder, a console manufacturer and we are a strong content provider with very strong IP. The basic underlying principle is that when we are able to showcase the value and the appeal of our software titles, then people see the value and appeal of our hardware. And that’s how we build momentum and we sustain that momentum, and it’s when we’ve built that momentum then that the third-party publishers are excited to join in and support us.”

“But when we have a situation like we have with Wii U, when the hardware is not reaching a suitable level of sales, then it’s harder for the third parties to come and support the platform, and that is when we have to rely more heavily on our first-party production, and we’ve experienced this at times in the past as well. So one approach that we take with that is an approach similar to Hyrule Warriors, where what we’ve done is we’ve taken one of our very strong IP and we’ve combined it with a strong gameplay system from an outside publisher and provided that on our platform as a way to continue to provide additional offerings to our consumers.”

“By leveraging our first-party studios to drive the appeal of both our software and our hardware, we’re then able to lay the foundation for the third parties to be able to do a meaningful business on our platforms. So as we go forward, going forward with the intent of trying to achieve that momentum and that foundation sooner. We achieved it with both Wii and DS, but it wasn’t there at the beginning. The third-party support for both of those systems came, but they weren’t there right at the beginning. And so we need to have the mentality of quickly establishing the appeal and that initial install base to make it easier for the third parties to come and support our systems earlier.”

“We’re constantly creating prototypes, many of which never see the light of day, but those prototypes, they come in a very wide variety, and they represent varying forms and varying systems and varying structures, so anything is possible. Ideally what I would like to see us do is, choose an approach that doesn’t require a lot of explanation, and is something that people can understand quickly at first glance. Ultimately we’re an entertainment company and we make entertainment products, but if it takes a lot of explanation for people to understand your entertainment product, you’re doing something wrong. So I don’t know when we’ll be able to show you something, but I hope that when we do Matt, you’ll reflect on our conversation today and you’ll say ‘A-ha, I got it!'” 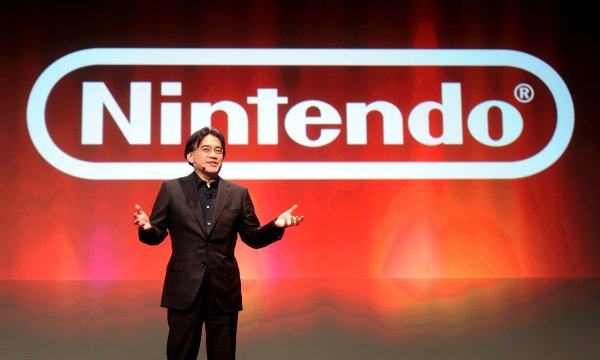 Why Nintendo President Satoru Iwata Mattered
Next Up: Editor's Pick