Why It Took Americans So Long to Care About Men's Fashion

New York Fashion Week: Men’s edition premieres this week. As the name suggests, it’s the men’s version of the women’s event that takes over New York biannually with a stream of models, designers, and outfits being feverishly dissected in media for days on end. The men’s fashion week is at a much smaller scale, but a host of designers, new and old have descended on Gotham hoping that American men will finally pay attention to couture the way their European counterparts have.

So why the sudden focus on men’s fashion? After all, it’s not like men emerged as a new demographic. Men have always needed to get dressed, have always been half the population, and have historically worked in office environments longer than women.

Men’s fashion has been perceived as boring—how many viable ways could you really reconstruct the suit? Ties get skinnier then fatter; colors creep towards pastel then return to bland office-appropriate hues; jackets lose boxiness and hug shoulders more. But we are in the throes of a men’s fashion upheaval. The basics of men’s officewear are getting thrown aside as business casual is becoming the norm: jeans are favored by startup types, ties are restricted to certain sectors, shirts are relaxing their starched collars. Suddenly, there’s a very urgent space for men’s fashion.

Social media has emerged as a key player in the turnaround in not only making fashion more accessible but offering a lens to what dudes around the globe were wearing. Think of early fashion blogs: Most were exclusively for women, but The Sartorialist was one of the first to incorporate men (albeit, focusing mostly on Europeans) into its spreads, creating an ideal of what men’s fashion could be—something that had been sorely lacking. Men, after all, relied mainly on pop culture for inspiration before; now, there lay an entire world of opportunity.

“The men’s industry has [overtaken] women’s in terms of growth over the last couple of years,” says Steven Kolb, chief executive officer of the Council of Fashion Designers of America, or CFDA, the group that organizes New York’s fashion weeks. “I think the ability to shop easily through e-commerce and mobile commerce has made it more within reach of the guy who wants to shop.” For the guy—and girl—who hates going to the mall, sifting through messy hangers with club hits blasting or looking for a more streamlined process, e-commerce has been a blessing in convenience, efficiency, and comfort.

The data supports this: Euromonitor International reported earlier this year that menswear saw an increase of 4.5% in $440 billion in sales in 2014 alone. A 2014 report from Bain showed that men’s luxury accessories have outpaced women’s since 2009, increasing up to 13% per year. Traditionally female designers like Prada, Hermes, and Dolce & Gabbana have launched men’s lines to great success. And men love to shop online for clothes—much more so than for techie gadgets.

A generational difference may also play a role in the changing attitudes toward men’s fashion, Kolb said: Millennials are much more tuned into their smartphones and social media, the prime spots for what’s hot and what’s not. Consider Millennials’ penchant for posting selfies: All of a sudden, what you wear is being broadcast to the world, and what you wear is saying a whole lot more about who you are.

“I think Millennials tend to use the way they dress as a statement,” Kolb said. “You see the public figures that people relate to, like sports figures, musicians—and [the consumer] just has more options.”

Male fashion role models are no longer restricted to the stereotypical trifecta of sports, music, and politicians; there’s an entire smorgasbord of types that are all equally as cool and all play into aspects of a man’s personality and lifestyle. Personalization, in other words, has arrived for the American man’s fashion palate, and, combined with the ease and dominance of technology in daily life, has made fashion more accessible.

Plus there’s more wardrobe flexibility in the modern workplace. Combined with alternative male identities that have made it socially acceptable to be fashion conscious and retain a strong sense of masculinity, whether it be gay or straight or transgendered (think: hipster, metrosexual, lumbersexual, gender fluid, androgynous or just nerd), men’s fashion has become a viable concept.

“I think the world’s attitudes towards masculinity have really progressed,” Jeremy Lewis, editor of Garmento, a fashion magazine, told Business of Fashion. “The classic male archetype has been pretty misogynistic, sexist, and slightly fascist and I think that’s broken down quite a bit over the last 20 years. It makes more sense in a world that is becoming less patriarchal that the male identity would shift to allow for something like fashion or style … to be adopted.”

But before American men can fully celebrate the inclusion of a men’s fashion week and how far we’ve come as a society, it’s worth remembering a key fact: The United States is sorely behind in this realm. New York was the last of the great four fashion capitals (the other three being Paris, London, and Milan) to create an exclusively male-centric fashion week. And the week is getting only a fraction of the attention that its sister organization gets.

Kolb realizes the uphill battle the CFDA faces in hosting the week. “It’s a new event and new effort and we’re able to connect to a broader audience differently,” he said, confirming that the show is slated for a repeat next year. “We have a robust marketing campaign, amazing fashion partners, this city, and magazines and newspapers and pretty cool campaigns.”

In other words, there’s no reason why the guys can’t have in on the fun of dressing up. 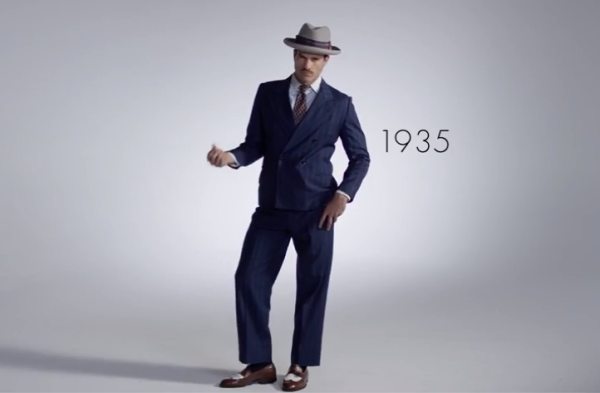 Watch 100 Years of Men's Fashion in Under Three Minutes
Next Up: Editor's Pick