Pope Francis continued his anti-poverty campaign in Paraguay on Saturday, delivering some choice words for what capitalism has meant for the poor.

“Certainly every culture needs economic growth and the creation of wealth,” the Pope told a gathering of civic leaders, in remarks reported by CNN. But he harshly criticized the gap between the wealthy and the impoverished, saying: “I ask them not to yield to an economic model which is idolatrous, which needs to sacrifice human lives on the altar of money and profit.”

Pope Francis did not mince words, CNN reports, comparing corrupt governments who persecuted political opponents to Hitler and Stalin. He went so far as to compare capitalism to an ancient practice in paganism of worshipping golden calves, saying the practice had “returned in a new and ruthless guise in the idolatry of money and the dictatorship of an impersonal economy.”

MORE What the Pope’s Left Hook in Bolivia Really Means

The Pope’s message continued from his previous stop in Bolivia, where he advocated for a revolution against the “new colonialism” of austerity programs, citing their inordinate effect on the poor and their “sacred rights” of housing, work, and land.

“Putting bread on the table, putting a roof over the heads of one’s children, giving them health and an education, these are essential for human dignity,” he said. 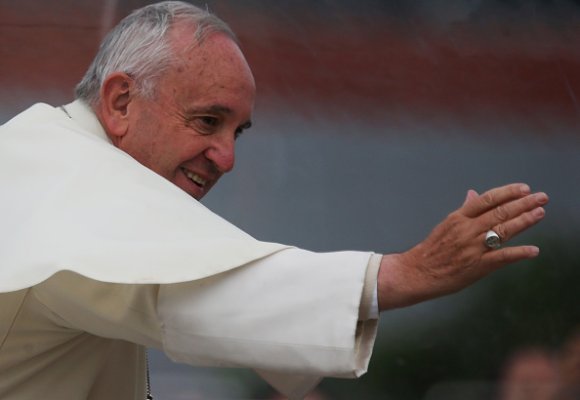 Read Pope Francis' Speech on the Poor in Bolivia
Next Up: Editor's Pick