Donald Trump is not going anywhere.

Casting himself as more than a billionaire real-estate magnate and reality television star on his bid for the White House, Trump claimed Saturday to speak for a “silent majority” of Americans who are frustrated with the direction of the country.

Rather that deterred, he appeared energized by the pushback his candidacy has received from the Republican Party and his primary opponents after suggesting weeks ago that many who have entered into the U.S. illegally are “rapists.” In a rambling speech to a crowd of thousands in the Phoenix Convention Center, he struck a potent combination of populist and protectionist policies, designed to tap into the undercurrent of unease within American society.

“The silent majority is back, and we’re going to take the country back,” he said, referencing former President Richard Nixon’s famous speech reaching out to Americans who were opposed to protests of the Vietnam War. “We’re going to make America great again.”

Trump promised to fine Mexico $100,000 for every person crossing into the U.S. illegally, pledged to tax imports by American-owned businesses that have shipped jobs overseas, and said he could destroy the Islamic State of Iraq and Greater Syria [ISIS] with overwhelming force. “I would take them out so fast,” he said.

He knocked traditional conservatives for not being committed to taking care of the poor. “I know this doesn’t sound very conservative, but we’ve got to take care of everyone, not just the people up there,” he said, motioning to the ceiling, as the crowd roared and whistled.

For more than an hour, the speech featured Trump meandering into name-calling of celebrities and businesses that have dissociated with him as he has become embroiled in negative headlines. “Thousands and thousands of people are cutting up their Macy’s credit card,” he claimed, of the department store that dropped his branded clothing line.

Trump, who is all-but-certain to make the GOP debate stage on Aug. 6 in Cleveland, indicated he would release his personal financial disclosure this week, which would clear the way for him to face off with his Republican rivals.

The speech was rife with Trump’s signature over-the-top flourishes and free-associations. “I went to the Wharton School of Business,” he said at one point.”I’m, like, a really smart person.”

“The press are liars. They’re terrible people. Terrible,” he said, pointing at the assembled cameras and scribes. “Not all of them, but many of them.”

“ISIS right now is building a hotel in Iraq,” he said. “They’re competing with me.”

At one point he bragged about the number of lobbyists he has employed and donations he has made to political candidates of all stripes, but promised he would be incorruptible. “I don’t need money,” he said, adding that if people wanted to donate to his campaign, he wouldn’t turn them away.

Trump also warned that Bush would be a poor negotiator on the international stage, and criticized him for his flip-flopping answer on whether he would have invaded Iraq.

Trump discussed Sgt. Bowe Bergdahl, the U.S. solider who was held captive by the Taliban for nearly five years after disappearing from his forward operating base and traded for the release of five prisoners at Guantanamo Bay in 2014, saying he would “send him back.”

As a small group of protestors scuffled with Trump supporters and security as they tried to hold up a banner, Trump quipped, “I wonder if the Mexican government sent them over here, I think so. We’ll take our country back.” 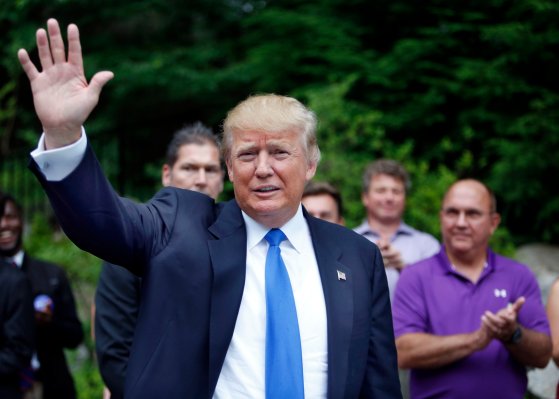 Republicans Plot New Tactics to Take On Trump
Next Up: Editor's Pick