At least once a week, the Greek Ministry of Labor opens its doors to hear the complaints of the needy. The visitors might represent a factory that has closed down, a neighborhood succumbing to rampant poverty, or a group of elderly people whose pensions have been slashed. But regardless of their plight, they are escorted into the fifth-floor office of Deputy Minister Rania Antonopoulos, who looks them in the eyes as they tell their stories and ask for help. It is not unusual during these meetings, she says, for the guests to break down in tears. “That is the hardest part of my job,” Antonopoulos told TIME during an interview at the end of June.

In the coming months, it will probably get a lot harder for her to manage these complaints if Greece moves ahead with its plan for another bailout from European creditors. In exchange for about $59 billion in loans over the next three years, the Greek government pledged this week that it would raise taxes and carry out painful reforms, including cuts to Greece’s bloated pension system. On Saturday, European Finance Ministers met in Brussels to discuss the Greek proposal, and many of them expressed grave doubts about whether it could be carried out in practice. “We will definitely not be able to rely on promises,” Germany’s Wolfgang Schäuble told reporters as he went into the talks.

He is right to question the plan’s feasibility. Unlike the European technocrats watching from afar, Greek officials will have to deal on a personal and political level with the plan’s impact on their fellow citizens, who have already experienced five rough years of austerity and recession. As those confrontations play out on city squares, at voting booths and in the offices of public officials across Greece, the government will face tremendous pressure to amend, delay and otherwise ease the measures it has promised to enforce.

Antonopoulos’ experience shows just how hard that pressure is to resist. Although Greece has already cut the average pensions by about a third in the last five years, pushing nearly half the country’s pensioners below the official poverty line, it’s not these cold statistics that drive home the pain of austerity. “It’s when you look at someone and you see the tears coming out,” said the deputy minister. “And that person could be my husband who has been laid off, my brother. That could be me.”

The desire to help in such situations, whether motivated by politics or not, has already been the undoing of Greece’s attempts to reform its pension system. In 2012, under the terms of its previous bailout deal, the Greek government promised to close one of the most infamous holes in this system: the list of so-called “arduous” professions, whose workers are allowed to retire years and sometimes decades earlier than the European average. Over the years, this list had grown to include some 600 professions—among them opera singers, hairdressers and television anchors—as a succession of Greek governments tried to win their support by letting them retire early.

“This is clientelism at its finest,” said Platon Tinios, a professor at the University of Piraeus, near Athens, who studies Greek pensions. “It is a system that’s completely mad.”

The 2012 reforms were meant to cut about 30% of the professions from this list—including the three mentioned above—but in practice the Greek government introduced a gaping loophole, said Tinios. Anyone who had worked in an “arduous” profession for 10 years or more could still retire under the previous rules. That meant the reform will be practically worthless for the next 20-25 years, Tinios said. Moreover, the revised list of “arduous” professions still includes many that do not seem arduous enough to warrant early retirement: workers in food retail, for instance, or the fish, cheese and ham industries.

So why should anyone expect Greece’s latest reform effort to be much different? Under its terms, which are being debated in Brussels this weekend, Greece would have to cut the “arduous” list down further as part of a reform plan meant to cut 1% of GDP per year in pension costs. Considering the fact that Greece’s pension system is the most expensive in the European Union by far—costing about 16% of GDP per year—this may seem like an easy set of changes to implement.

But it does not look so easy at ground level, said Antonopoulos. Just think about the group of elderly people who came to her office with their dilemma in June. For most of their lives they had worked in a profession that was classified as arduous, and when the crisis hit, they were laid off a few years shy of when they had always planned to retire. On top of that, the pension reforms of 2012 raised their retirement age, meaning they could not draw their pensions unless they worked another few years in their no-longer-arduous field of expertise. So what were they supposed to do? Amid the crisis, finding a job in their profession is impossible, said Antonopoulos. They were stuck.

“They are 59 or 60 years old. They have been unemployed for three years. And they cannot retire,” she said. “Shouldn’t this group be given their pension at the age when they were expecting it? What is this idea of punishing someone who has zero chances of getting a job?”

In her heart she felt that these people deserve a break—an exemption that would let them retire regardless of what’s written in the new pension rules. But if Greece moves ahead with the reforms its government promised on Thursday, the temptation to make these exemptions will grow, as will the number of frustrated Greeks lining up to complain to their elected officials. Unless those officials give their people a break, they are likely to get voted out of office and replaced by a government that will be more sympathetic. No wonder, then, that European leaders are skeptical about the Greek ability to hold firm. Faced with the suffering of their voters and compatriots, it will be all too tempting for the government to tweak the details of its reforms. 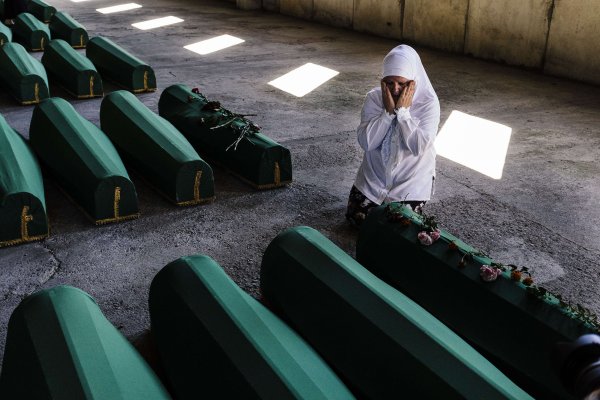