Here's How J.J. Abrams Answered a Blunt Question About Diversity in Star Wars

Though many fans at San Diego Comic-Con may have been satisfied just to see director J.J. Abrams and several of the movie’s stars at the Star Wars panel on Friday, two fan used the opportunity to question the casting of the film.

Two young Asian fans said that one of the reasons they enjoyed Abrams’ Star Trek so much was its diverse cast. They hoped to see the same for Star Wars, but could they expect any Asian characters in future films?

“First, I want to say: go, Asians!” Abrams joked. “I’m not casting the movies that are coming up but if I was I would cast them as only Asian. I think you’ll see there are Asians in this film.”

“We didn’t write Fin to be any color or anyone to be any color,” he added, referring to John Boyega’s character in the film. “We just cast the movie.” He continued by saying he thinks it’s important that fans see people who look like themselves in films.

Though none of the stars who attended the panel were Asian, Abrams has received praise for piecing together a diverse cast that includes black and Latino actors for a mainstream film whose most recognizable characters—from Harrison Ford’s Han Solo to Natalie Portman’s Padmé Amidala—have been white. 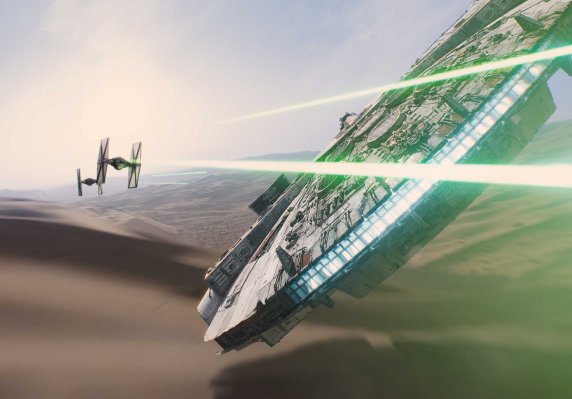 Go Behind the Scenes in This Star Wars: The Force Awakens Video
Next Up: Editor's Pick