Scott Walker Seeks to Calm Conservatives as He Joins 2016 Race

Scott Walker made official Monday morning what everyone has known for months: He is running for President of the United States. “As one of our nation’s most loyal and active conservatives,” he emailed supporters, “I want you to be among the first to know I have decided to officially seek the Republican nomination.”

But not everyone agrees that Walker has always been the model conservative he claims. On issues important to conservatives, Walker has shifted positions or adopted new rhetoric as he prepared for his national campaign. The litany of changes includes same-sex marriage, abortion rights, immigration, education standards, Obamacare and corporate subsidies—all litmus tests for the deeply conservative voters in Iowa and South Carolina. And in each case, his new views help his effort to capture the GOP nomination.

But even among his likely supporters, he still is facing some hesitation. Yes, he’s saying the right things and became a conservative hero when he gutted union rights for state workers. But does he mean it? That’s his biggest challenge he will have to overcome after he makes official his White House run with a rally on Monday then hits the road to campaign in the early nominating states of Iowa, New Hampshire, South Carolina and Nevada. “Initially, there was some skepticism from social conservatives, especially on the marriage issue,” said Brian Brown, President of the National Organization for Marriage.

For instance, Walker has acknowledged that he attended the wedding reception for his wife’s cousin, Shelli Marquardt, and her wife, Cathy Priem. “Even though my position on marriage is still that its defined as between a man and a woman, and I support the constitution of the state, but for someone I love, we’ve been to a reception,” Walker told activists earlier this year during a summit in New Hampshire. Walker’s then-19-year-old son Matt was the couple’s best man. The couple later was listed as co-hosts for last year’s Fourth of July barbecue at the Governor’s Mansion in Madison.

Yet when the Supreme Court ruled there is a constitutional right for same-sex couples to wed, Walker released a blistering statement and pledged to undo the ruling. It was among the most forceful reactions to the decision among the crowded field of candidates for the 2016 nomination. “Over the course of the last month, Governor Walker and his team have been very strong in calling for a constitutional amendment on marriage,” said Brown, who has conferred with Walker about that issue and others.

Still there is lingering uneasiness that Walker is as steadfast against same-sex marriage as Brown would like. The day after Walker released the fiery statement against the Supreme Court, he was silent on the issue during a campaign trip to Colorado. His wife, Tonette, was with him on that trip and later told the Washington Post that she did not share the Governor’s views on marriage.

“Is it still a concern? Of course,” Brown said. “There seems to be pushback from inside his own family on his views.” But, Brown added: “Governor Walker is the one who will make the decision if he’s President.”

Walker captured activists’ imaginations early in the race with a biography that fills every box on a conservative wish list. He’s the son of a pastor and spent time as a child in first-off Iowa. He has executive experience, first as a county executive and then as a Governor. He became the first Governor to beat back a recall effort and won three elections over four years. He went head-to-head with Wisconsin’s unions and won. And he has a Midwestern likeability sure to come in handy in must-win states during a general election, namely Ohio. Among the GOP’s elite donor class, he’s known simply as “Scott.”

But there is a nagging feeling that Walker might not be their guy. “There’s no doubt that he listens to his wife, and that’s a big influence,” said Michael Farris, founder of the Home School Legal Defense Association. “It matters. Family members matter, especially your wife. That’s one of the most difficult that Walker is going to have to overcome with our community.” He predicted Walker could overcome those questions, but cautioned it will not be easy. “Someone with a leftist wife is going to have a hard time,” he said.

At the same time, Walker’s foreign trip earlier this year—a must-do for any serious candidate—left many backers scratching their heads when, during an appearance at a foreign policy think tank, he compared fighting the Islamic State terrorists to battling union bosses in Wisconsin. He has since been beefing up his foreign policy chops with regular tutors. Former Sen. Jim Talent, a wonk who was a top policy adviser to Mitt Romney’s presidential runs, is among Walker’s inner-circle these days.

And then there are the flip-flops, those ever-present changes in positions that have moved Walker to the right. During his last campaign, he promised decisions about abortion were between a woman and doctor; this year, he signed a law banning abortion after 20 weeks. Walker has reversed his earlier position in favor of a path to citizenship for immigrants in the country illegally. He still hasn’t convinced some activists that he would “repeal Common Core,” even though they are voluntary standards adopted by states and were never a law. He allowed residents of his state to participate in the federal health care law known as Obamacare. And anti-tax activists have been relentless in their criticism of Walker for allowing the Milwaukee Bucks to finance a new arena through $220 million in state-issued bonds.

“He’s a strong fighter against liberals,” said Brent Bozell, the chairman of the conservative ForAmerica online community. “When you like someone for one thing, then you tend to believe he’s with you on everything. It’s human nature. But once you start looking at his positions, the specifics, you may or may not reach a different conclusion.”

Summing up Walker’s central challenge, Bozell notes that he personally likes the Wisconsin Governor. “Walker starts off with an advantage because of his campaign record. But people ultimately don’t vote for you for the past. They vote for you for the future.” And when it comes to how, exactly, Walker would run the federal government, there remain questions about just how committed he is to his current positions. 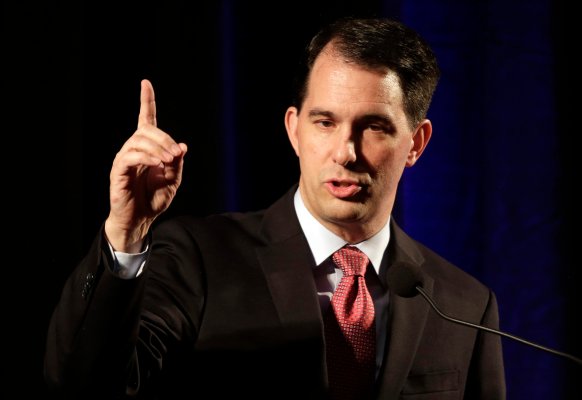 British Leader to Scott Walker: I Never Dissed Obama
Next Up: Editor's Pick