Why Greece Meant 'Yes' When Voting 'No' to European Bailout

For Zissis Roumbos, a stand-up comedian in Athens, the twists and turns in the Greek debt crisis over the past two weeks have provided enough material to last a year. Take, for instance, the outcome of Sunday’s referendum. At the urging of their government, a majority of Greeks voted “No” that day to a new bailout from their European creditors. Four days later, the same government asked for the bailout after all, under pretty much the same terms that voters had rejected. In trying to capture the absurdity of this, Roumbos found that a one-liner would suffice: “Greece is the only country where ‘No’ really does mean ‘Yes.'”

A lot of Greek people, in other words, did not mean to reject the bailout when they voted to reject the bailout. They want the bailout, because they know how desperately they need one. But they also wanted to reject it first, as a sort of prideful and cathartic gesture, so that they might then accept it with their heads held a little bit higher. On the streets of Athens, this is roughly the reasoning one discovers after talking to enough people for long enough, though in the process an outsider should expect to feel a bit confused from time to time.

What it all boils down to, more or less, is that the Greeks voted not so much with their heads last Sunday as with whatever part of the body is home to their abundant pride. “I voted with my soul, because I cannot vote with reason,” said Natassa Platsouka, a 39-year-old librarian who has had to provide for her two teenage children over the past two years with no job and no income. “For me the first thing was to say ‘No’ to everything we suffered.”

But that does not mean she voted without any guile. As Prime Minister Alexis Tsipras had argued before the vote, a rejection of the creditors’ bailout offer would give him more latitude to negotiate another bailout, even if its terms would only be a little bit better. “I wanted to give a stronger position for negotiations,” Platsouka said of her decision to vote ‘No.’

This is indeed how things have played out. Armed with the public rejection of the creditors’ deal, the government proposed a new deal Thursday that seemed to meet all of the creditors’ requirements for more austerity, more cuts to public spending and higher taxes.

These measures will no doubt be painful for Greece, where wages and pensions have already been cut to the bone under the conditions of the two previous bailouts it has received since 2010. But over the past two weeks, the Greek people have gotten a bitter taste of what awaits them in a future without more emergency loans from their creditors. When those loans were cut off on June 28, Greek banks were forced to close down and limit withdrawals to 60 euros per day. The government also had to block most international transactions that would allow money to flow out of the country. In practice, that has cut Greeks off from online services like iTunes, PayPal, the App Store and many other forms of Internet commerce.

But instead of clinging to their savings accounts amid the crisis, many Greeks have started spending erratically. Their reasoning, again, can seem confusing, but it comes down to an erosion of confidence in the banking system. Greeks are not sure whether their banks will ever reopen. They are not sure whether they will ever again have free access to all the euros in their bank accounts. So they have felt a sudden need to spend what’s in those accounts as soon as possible, and since the start of last week, when cash withdrawals and foreign transactions were restricted, they have had two ways of doing that. They can either use their debit cards or make bank transfers inside Greece.

As a result, jewelry and electronics stores have been selling out of merchandise. Though their customers may have no urgent need for a diamond necklace or a flat screen TV, they do feel a need to use their debit cards as much as possible, especially to acquire durable goods, which would retain their value in case a bank collapse wipes out their savings.

In perhaps the strangest twist, the desire to spend whatever they have in their accounts has even spurred Greeks to pay off all their taxes. At the Finance Ministry, officials watched in disbelief as the money poured in last week, unable at first to explain the influx of $700 million between Monday and Thursday, said Panos Melachrinos, an adviser to the Ministry on tax issues. “Then we understood that people want to settle their debts before things get worse,” he told TIME. “They do not know if they will be able to pay tomorrow. So they pay today, right now.”

At the same time, other forms of commerce have been grinding to a halt. In Athens, a city with a vibrantly Mediterranean café culture and nightlife, many people have stopped going to their favorite bars in order to conserve cash. “Nobody’s coming,” said Anastasis Mamidakis, who runs a haunt for the local hipsters in a former silk factory in the center of Athens. “People are staying home and drinking, or drinking before they come so they don’t have to spend any money at the bar.”

The same goes for the theater scene, said Roumbos, the comedian: “When you can only withdraw 60 euros from the bank, who’s going to spend 10 on a ticket to a show?” The last time a comedy show could fill a club in Athens was in February, he said, when he performed in a satire called Fiasco. In hindsight, its playbill seems oddly prophetic. It showed a doctor trying to resuscitate a Greek flag with a shock to its heart, but right behind him three nurses (one played by Roumbos) have unplugged the defibrillator. “I guess you could see that as a symbol for the bailout,” he says.

With their referendum last Sunday, the Greeks pulled the plug on their own financial lifeline. Now they are scrambling to plug it back in. 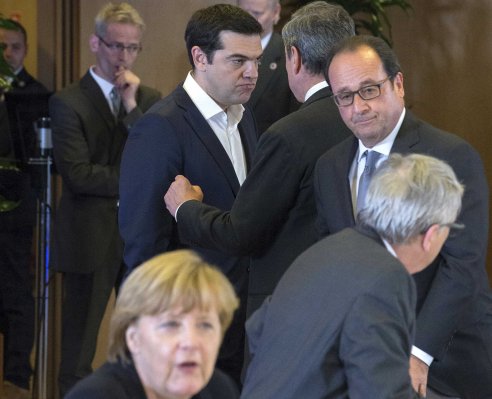