What the Pope's Left Hook in Bolivia Means

Pope Francis’ speech in Bolivia on Thursday will likely go down as one of the most significant moments of his July trip to Latin America. In a poetic, 55-minute manifesto, Pope Francis called for economic justice for the poor in some of his strongest language yet.

“You are social poets: creators of work, builders of housing, producers of food, above all for people left behind by the world market,” he told a crowd of Bolivian indigenous workers, farmers, and social activists. “You, the lowly, the exploited, the poor and underprivileged, can do, and are doing, a lot. I would even say that the future of humanity is in great measure in your own hands, through your ability to organize and carry out creative alternatives, through your daily efforts to ensure the three “L’s” (labor, lodging, land) and through your proactive participation in the great processes of change on the national, regional and global levels. Don’t lose heart!”

From afar, the words make it sound like Pope Francis is rallying at the barricades from the stage of Les Misérables. Throw in the fact that Bolivian President Evo Morales presented the Pope with a hammer-and-sickle crucifix, and it seems even socialist.

But context matters. Pope Francis did not give this speech while talking to the U.S. Congress or even in front of the United Nations. He was speaking in Bolivia, the poorest country in South America. He was also standing in front of Morales, an Aymara Indian who was wearing a jacket with a picture of Ernesto “Che” Guevara who is the country’s first president to come from its indigenous majority. And he was doing it on his first visit to a country that has had a troubled relationship with the Catholic Church of late.

Under Morales’ administration, relations with church officials have been strained. Nearly 90% of Bolivians were raised Catholic, according to the Pew Research Center, and yet Morales’ government has sought to limit the Church’s power. Bibles and crosses were removed from the presidential palace when he took office in 2006, and a new constitution later declared the country a secular state. Meanwhile 60% of current Protestants in Bolivia say they were raised Catholic, also according to Pew, highlighting Catholic concerns of an evangelical exodus from the faith in the region.

Francis’ apology for Church oppression of indigenous people in the colonial period has particular meaning in this political context. Francis went off script in his apology, making very clear his efforts at reconciliation to set a stage for a future reconciliation. “I also want for us to remember the thousands and thousands of priests who strongly opposed the logic of the sword with the power of the cross,” he said. “There was sin, and it was plentiful. But we never apologized, so I now ask for forgiveness. But where there was sin, and there was plenty of sin, there was also an abundant grace increased by the men who defended indigenous peoples.”

For his part, Morales was happy to use the occasion of the Pope’s visit to score a few political points of his own. He used the visit to say on Thursday that he has been seeking a meeting with President Obama, whom he called an imperialist at the U.N. in November. Bolivia’s diplomatic ties with the U.S. broke in 2008 when the country expelled both the U.S. ambassador and the U.S. Drug Enforcement Administration. Bolivia is one of the world’s largest producers of cocaine. The Pope’s role in brokering the U.S.-Cuba détente was clearly on his mind, and he tellingly gave credit only to the Pope and Cuba. “It is no concession of Obama’s, but the triumph of the Cuban people and the world as a whole,” he said. For him, then, Pope Francis could be a valuable link between Bolivia and the United States.

In the end, the speech is a reminder that Pope Francis is increasingly a political player in a multi-level game of chess. His power and sway holds particular importance for countries in Latin America, who champion him as the first pope who is actually theirs. The push and pull with Morales tests just how much of a free agent Francis really is.

That outcome also carries particular weight as the world waits to see how Pope Francis will handle his first trip to the U.S., the world’s capitalist superpower, especially looking ahead to his address to a joint session of Congress. There, conservatives continue to raise questions over how close the Pope’s ties to socialism actually are, and whether they approve of his critique of capitalism.

Former ambassador Otto Reich, President George W. Bush’s Assistant Secretary of State for Western Hemisphere Affairs, says Pope Francis’ economic and political agenda in his trip to Latin America has gone too far. “This pope grew up in a third world country that frankly is an example of what happens when you don’t have capitalism and democracy,” Reich says. “I was very optimistic when he was named and I have been extremely disappointed in the political and economic aspects of his papacy. … He’s a victim of third world education, and Argentina is a particularly sad example.”

With reporting by Massimo Calabresi. 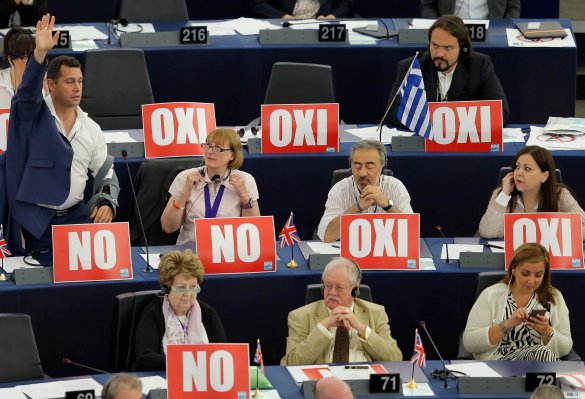 Why Greece Meant 'Yes' When Voting 'No'
Next Up: Editor's Pick